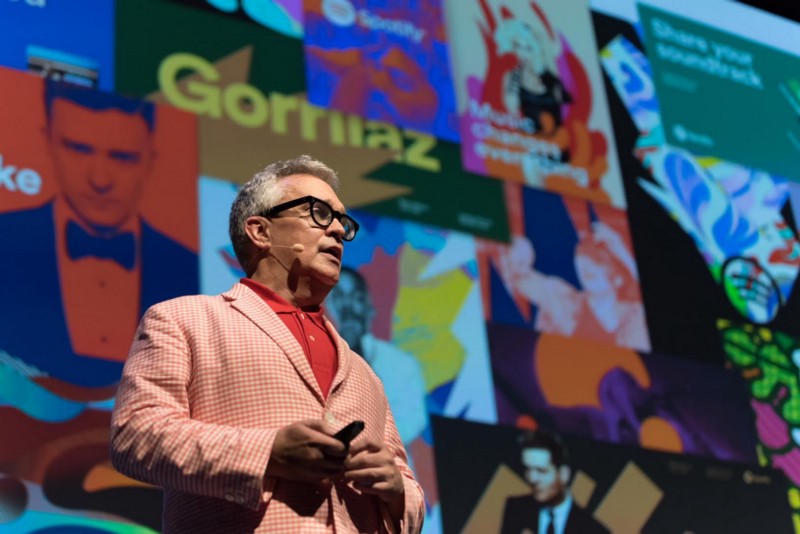 Brian Collins is Chief Creative Officer and Co-founder of COLLINS, a U.S. brand experience design company that works with both established traditional companies as well as some of the best-known digital players such as Instagram, Airbnb and Spotify. For 10 years prior to the founding of COLLINS, he was the chairman and Chief Creative Officer of the brand and innovation division of Ogilvy. Brian’s clients have included Coca-Cola, Facebook, The Ford Motor Co., IBM, Target, Levi Strauss & Co., Jaguar Cars, Mattel, Microsoft, Nike, Target, and Unilever. Collins, a guest at a recent invitation-only Kinnernet unconference in Avallon, France spoke to The Innovator about the importance of continuously revitalizing a company’s brand in order to stay relevant.

Q: What can traditional companies learn from the fact the even the coolest digital companies are continuously refining their brands?

Every company needs to continuously renew its brand to stay relevant. Today anyone can launch a global business almost overnight at minimal cost. The real challenge isn’t finding a good business idea, anymore. They’re everywhere. The challenge is building attention and driving relevance for those ideas. The real, heavy innovation work ahead will be in managing the right brand story — helping people relate to what you make and deliver.
Look, I define a brand simply: A promise performed consistently over time.
Our job now is to constantly reaffirm what promise your company really performs. What will the customer be seeking next? What makes you extraordinary in that context? How can you become even more so?

We’ve been lucky. We get to work with extraordinary companies; Spotify, Dropbox, Airbnb and Instagram, among them. But even new companies can reach a point where they must evolve their brand, too — so they can scale and reach new customers. The stories they tell the world can run out of road. So we help our clients revisit their purpose and renew it: Who are we really, now? What’s our best story to tell? How can we better serve our customers and their communities?

Companies that are hell-bent on delivering extraordinary customer experiences are thriving. And will continue to. They’re no longer in competition with anyone else. They’re really in competition with the future itself. Brands like Equinox, Spotify, Instagram are emerging sui generis: They’re in categories of one — moving quicker than the culture around them. They’re answering questions their customers don’t even know how to ask.

Q: Should companies think about brands the way they think about digital strategy: something that needs to continuously evolve?

BC: There is no choice. It’s either that or become Kodak and allow an out-of-date brand story drive your fate. In 2004 my team was invited to work with Kodak. People forget this, but at that point they had already created a series of great digital cameras. They had also anticipated photos were going to be shared online and invested in a new technology platform to do it, the “Easy Share Gallery.” Patronizing name, sure. But they had millions of users. I mean, Kodak’s engineers got it. The company then asked my team at Ogilvy to help them use design to make all of this more understandable. So off we went to Rochester.

When we arrived their hallways still were hung with posters urging their employees to “IMAGINE NEW WAYS TO WORK WITH FILM!” At first we tried to get them to re-imagine their story in a newer, higher-order way. But it became clear that that their culture saw the digital revolution as the way to sustain their aging, legacy printing businesses. At one point, Kodak even mailed their new online Gallery customers​ demanding they had to purchase something through the Gallery website — photo albums or whatnot. And if they did not do that, they would lose all their pictures as Kodak would block their photo albums. I mean, really? Kodak was using all of their new 21st century technology to continue to push a product they had invented back
in the 19th century​ – “we sell prints.” But the world had moved on. Cameras had been absorbed into cellphones. Kodak’s anchor products, legendary history and massive scale had become irrelevant.

It’s easy to say this in retrospect, but if Kodak had used their new technology to deliver on a different, ​larger, ​more customer-focused story, instead — we help you “share memories” — they might have been able to anticipate that their online sharing platform, the Gallery would become the business in itself, and not just another way to sell more ​”Kodak Perfect Touch” ​prints.

By contrast, look at Spotify. They began as a great technology platform for music. But people weren’t looking for technology. They were looking for music. So we worked with Spotify to reimagine and redesign their brand as a music company first –supporting the global music community and its many audiences. We worked with Spotify to use design to deliver that new brand story everywhere — supporting their customers to create soundtracks for their daily lives.

Q: How should companies think about their own story?

BC: Whether you like it or not your brand story already exists. So you should manage it as you would any other powerful company asset.

After your product, your means to deliver it, and your audience, your story will be the most potent tool you have to build your business.
To succeed, though, your story must embody both authenticity and cultural relevance. Authenticity is an internally facing question, identifying your organization’s beliefs: “What do you stand for?” The second set are externally facing questions, defining relevance: “Who are you serving? What are they looking for?” It demands listening to customers and anticipating what they’re seeking. It helps you align to larger cultural truths.

At the intersection of authenticity and relevance sits your story. A good story should define what you are fighting for, why you do what you do, and explain why people should care. But let’s rewind for a second. Much of American cultural mythology has been wrapped up in conquering the Wild West — and the rugged individualism and resilience that American pioneers needed to cross that frontier. In the early 1960’s, TV shows like Wagon Train, The Rifleman, Rawhide filled the airwaves. So when John Kennedy needed to rally the entire nation to compete against the Russians in the space race after we were blindsided by Sputnik, Kennedy summoned that same ​Western ​mythology as the country’s guiding spirit. He recast the stars and outer space as “The New Frontier.” In doing so he reshaped the space race with modernist benevolence as the “Space Age”. He moved the United States into that story instantly — reframing the work of NASA as man’s highest calling and greatest destiny — and in a way that was both authentic to American history and relevant to a people seeking an inspiring, more optimistic view of the future than a sinister, cold war competition with the Soviet Union. Kennedy’s story got us all to the future faster, landing us on the moon in 1969.

Our role here at COLLINS is to help companies work better for people, uncovering, clarifying and amplifying their most potent brand story — and then use design to bring that to life in all they do. We work with leaders to evolve and improve their brands to be more responsive to their customers’ evolving needs. We will then build experiences and technologies that are better connected to them — and work to get our clients into their futures, faster.

Q: How do you advise companies to maintain the speed of change and stil be excellent?

BC: The coming challenge for all of us will be to maintain both virtuosity and velocity, concurrently. Emerging tools like predictive analytics and AI and will help a lot. But my experience is this; those companies that embrace both authenticity and higher-order cultural relevance will thrive and move faster than anyone around them. They’ll get to the future before their customers arrive. They’ll also learn this secret: it’s hard work to pull off, but if you build your story authentically​ and design your brand’s experiences to deliver your story consistently, your customers will tell your story for you. Seriously. And that, in the end, is the very best kind o​f brand story​ you will ever earn: Trust.