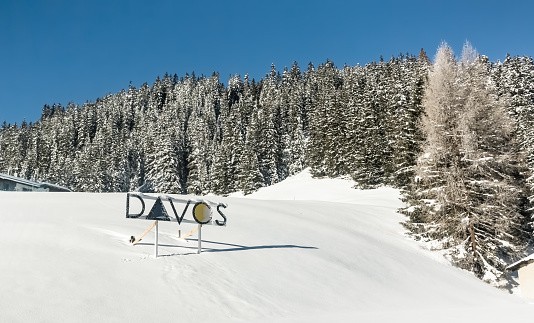 Does your business really need to embrace blockchain, a digital ledger technology? The World Economic Forum introduced measures to address this question and other C-Suite concerns — such as the impact of automation on the labor force and cyber security — at its annual meeting in Davos, January 23–26.

Blockchain:There were more mentions of blockchain on the official program of the annual meeting than of the U.S. and Europe combined. And that’s not all. Storefronts on the main promenade in the alpine village were transformed into the sites of mini alternative conferences by people involved in crypto currencies and initial coin offerings.

Inside the official conference center all blockchain-related sessions were over-subscribed. When Sheila Warren, head of blockchain at the World Economic Forum’s Fourth Industrial Revolution Center, asked chief executives attending sessions how many of their companies were working on blockchain nearly all of them raised their hands. But when she asked how many understood why their company was using blockchain only a few knew. That is why the Forum is developing a toolkit to help executives decide whether digital ledger technology is needed– or not, says Warren.

The Forum is also helping governments understand use cases for blockchain. At the annual meeting the Canadian government announced it will collaborate with the Forum and partners to test how digital ledger technology might be applied to air travel. Canada plans to launch a “Known Traveler Digital Identity” prototype, and then run a proof of concept pilot project with the Dutch government to demonstrate the potential of emerging biometrics and distributed ledger technologies.

The launch of the Known Traveller Digital Identity prototype is the first step in an ambitious road map for public and private sector leaders to start small and scale fast to radically transform the border-crossing experience for the majority of legitimate travelers, according to the Forum. By 2030, international air arrivals are expected to reach 1.8 billion passengers, a 50% increase from the 1.2 billion arrivals recorded in 2016. To accommodate this growth the public and private sectors will need to address infrastructure, human resource, and procedural constraints, while at the same time maintaining national and international security standards, according to a new report by the Forum, in collaboration with Accenture,

The Known Traveller concept is founded on the principle that an individual traveller has control over the use of their own identity and its components, allowing them to push proof of their identity information — secured by distributed ledger technology and cryptography — to governmental and private-sector entities throughout their journey.

“With travelers providing access to verified personal biometric, biographic and historical travel data at their discretion, they can assist authorities to undertake risk assessments and pre-screening in advance: essentially verifying their identities and providing secure and seamless movement throughout their journey using biometric recognition technology” John Moavenzadeh, Head of Mobility System Initiative at the World Economic Forum, said in a statement. “Not only does this provide for greater personalization and passenger-centricity in the design of services, but the passenger becomes a central actor in ensuring public safety”.

Artificial Intelligence: Ensuring that artificial intelligence is applied responsibility and training people for the jobs of the future were high on the agenda in Davos. A new initiative was launched during the Forum’s annual meeting called Closing the Skills Gap 2020. It is a global call for top global businesses to lead training, reskilling and upskilling initiatives between 2018 and 2020. To date, 26 global founding partners have signed up, collectively committing to training, reskilling and upskilling over 8.1 million people by 2020.

Cybersecurity: The forum launched a new Global Centre For Cybersecurity. The center will be based in Geneva, Switzerland, and will function as an autonomous organization under the auspices of the World Economic Forum.

The aim of the center is to establish the first global platform for governments, businesses, experts and law enforcement agencies to collaborate on cybersecurity challenges as cyber-attacks are surpassing the capacities and institutions that are currently dealing with this threat in an isolated manner.

“If we want to prevent a digital dark age, we need to work harder to make sure the benefits and potential of the Fourth Industrial Revolution are secure and safe for society. The new Global Centre for Cybersecurity is designed as the first platform to tackle today’s cyber-risks in a truly global manner,” Alois Zwinggi, Managing Director at the World Economic Forum and Head of the Global Centre for Cybersecurity, said in a statement.

New technologies like artificial intelligence, the Internet of Things and robotics and their application in sensitive areas such as finance, healthcare, telecommunications and mobility make it all the more important to keep up with the increasing speed and sophistication of cyber-attacks. The cost of cybercrime to the global economy could go up to $500 billion annually, according to experts.

Future of Food: Discussions in a special session entitled “Tasting the Future of Food” recognized that current approaches to meat production will be inadequate to meet growing demand for proteins. Tech innovations in meat and protein delivery such as laboratory-grown meat, plant-based protein alternatives and ultra-precision farming will help but advanced production and feed systems and a change in consumer behavior is also needed. The session concluded that government policy and international cooperation will be critical — in both the developed and developing markets. Ideas and recommendations emerging from the annual meeting will be discussed in June 2018 at the World Economic Forum Annual Meeting of the New Champions in Tianjin, China, and in September at the World Economic Forum Sustainable Development Impact Summit alongside the UN General Assembly in New York. A final paper with recommendations will be published after the World Economic Forum Annual Meeting 2019.

According to World Bank estimates about 1.1 billion people lack formal identification. Digital identity and access systems can unlock a range of basic and empowering services for individuals, including financial inclusion, healthcare and education. Equally, they hold significant promise for helping refugees and displaced populations to access immediate and longer-term services.

“We estimate it will take $12 billion to achieve identification for all,” Kristalina Georgieva, Chief Executive Officer, World Bank and co-chair of the Identification for Development (ID4D) High-Level Advisory Council with Amina J. Mohammed, United Nations Deputy Secretary-General, said in a statement. The World Bank will secure over $750 million investments in ID-related projects in the next three years and we will strive to mobilize more financing from other sources, she said. “If we are to reach more than a billion people without proof of identity, we need everyone to work together, including countries, development partners, UN agencies, the private sector and civil society.”

Opening of Global Network Of Centers For Fourth Industrial Revolution: The Forum announced an international expansion of its San Francisco-based Center for the Fourth Industrial Revolution. New affiliate centers will open in India, Japan and the United Arab Emirates. In cooperation with host governments and key companies, affiliate centers will build on the work under way in San Francisco to close the gap between emerging technology and traditional policy-making. The Center for the Fourth Industrial Revolution model is to bring together business leaders, governments, start-ups, civil society, academia and international organizations to co-design and pilot innovative approaches to governance for emerging technologies. (See the story about Rwanda and drone policy on The Innovator’s home page: https://innovator.news/rwanda-pioneers-drone-regulation-69a81b8264f9.)

The World Economic Forum opened the first Center for the Fourth Industrial Revolution in San Francisco in March 2017. Center projects cover multiple areas of technological innovation, including autonomous mobility, artificial intelligence, blockchain, drones, precision medicine and Internet of Things (IoT). The expansion to new geographies reflects the need from businesses and governments to become more agile and their desire to help shape the development of emerging technologies.

Collaboration agreements with Denmark, Bahrain and the Inter-American Development Bank are in place. They join 38 businesses and the governments of Japan and Rwanda already engaged with the Center in San Francisco. Governments that join commit to piloting Fourth Industrial Revolution policy tools in their jurisdictions.