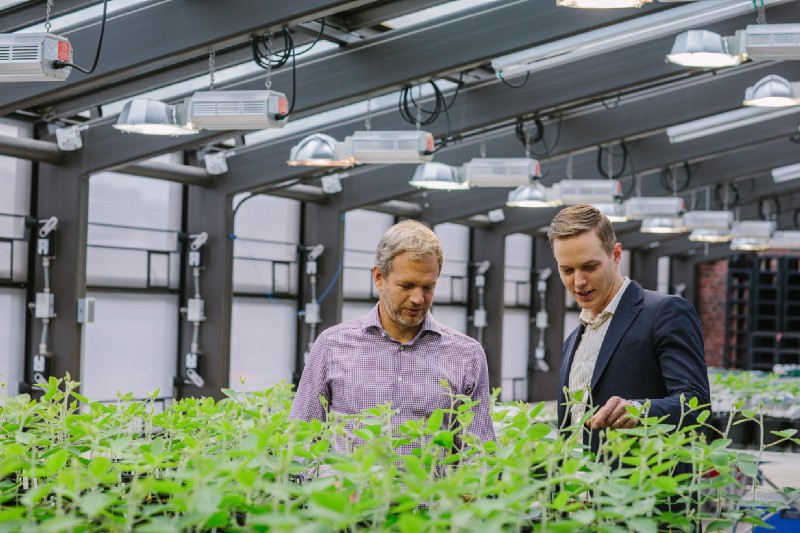 Indigo Agriculture, a 2017 World Economic Forum Tech Pioneer, uses plant microbiomes to strengthen crops against disease and drought to increase crop yield for farmers. The company believes it can obtain 30% to 50% yield improvements over the next 10 years, helping the world meet an expected 40% increase in demand for food by 2050.

Like human microbes, plant microbes evolve over time to improve and protect plants but can be impacted by their environment including heat, drought and modern agricultural practices which have introduced widespread use of chemicals.

Serial entrepreneur David Perry, Indigo’s CEO, says he started with the premise that “if you could figure out which microbes are beneficial to plants and put these microbes back you would have healthier plants that would yield more.”

Easier said than done as there are literally trillions of microbes. By using genomic sequencing and computational bioinformatics Indigo assembled an enormous database of genetic information from these microbes, then applied algorithms and machine learning to predict which ones are most important to the plant’s health.

These specially selected microbes are used to coat seeds of corn, cotton, rice, wheat and soy crops. The process makes the plants healthier, saves water and reduces the need for fertilizers, fungicides and pesticides, says Perry.

The company has commercialized the treatment for its first five crops. About a half a million acres have been planted with the specially coated seeds, mostly in the US, but the company is starting to plant fields in Australia, Argentina and Brazil.

Farmers report a 5% to 15% yield improvement from the initial treatment, says Perry. The rate varies depending on the crop and conditions. In addition the treatment is proving effective in helping plants use water more efficiently. “Preserving our fresh water is one of the biggest issues facing our planet and 70% of water goes into agricultural,” he says.

Last month Indigo reported a 6% to 8% improvement in water efficiency for wheat growing in Kansas and the same range for cotton, soy and rice, says Perry. “This is just the beginning,” he says. He believes the process can help significantly reduce the need for fertilizers, fungicides and pesticides.

If the company is successful Perry says it won’t just increase yields by 30% to 50% by 2030 but also improve the economics of farming, giving growers increased market power, premiums at harvest and data-based agronomic information.