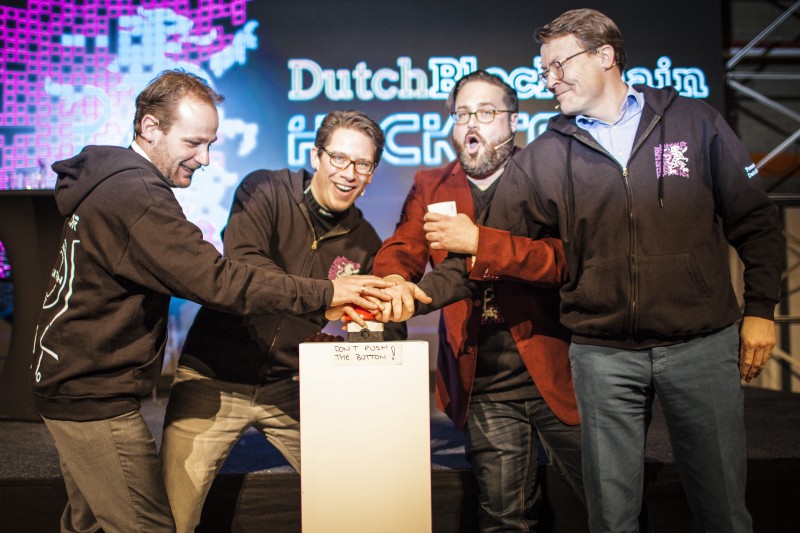 The Netherlands’ blockchain hackathon –which claims to be the world’s largest — doesn’t just attract geeks and entrepreneurs behind hot new startups. Attendees include Prince Constantijn van Oranje, a member of the Dutch royal family, city officials and executives from large corporates. That’s because the country, which will host a Blockchain Summit in the Hague Sept. 28, is on its way to becoming a blockchain nation. The Dutch government has launched more than 25 blockchain trials and Dutch banks, energy companies, pension funds and the Port of Rotterdam are all testing the digital ledger technology.

“Blockchain has a lot of promise and people are really keen to explore what the opportunities are,” says the prince, who in his role and co-founder and chairman of StartupFest Europe, acts as the country’s special envoy for startups.

The blockchain activity –which includes startups, government, universities and corporates — is part of a larger effort to turn the Netherlands, which for centuries has been at the heart of global trade, into a world-class technology hub.

Some 15,000 people are expected to attend StartupFest Europe’s seven different technology conferences in different locations around the Netherlands this week, covering topics that include not just blockchain but digital health, future technologies, technologies that help solve some of the world’s biggest issues, fintech and cybersecurity, raising startup capital and the future of the energy sector.

While the Netherlands is home to high profile tech ventures in a variety of sectors such as Adyen, which has achieved unicorn status (a valuation of $1 billion or more) by providing businesses with a single solution to accept payments anywhere in the world and the Hardt Hyperloop project, which won Elon Musk’s SpaceX hyperloop pod competition, blockchain initiatives are multiplying and growing in importance.

“There are a strong set of initiatives here in the Netherlands,” says Rene Penning de Vries, a member of the Dutch Blockchain Coalition, a joint venture between industry, government and academia initiated by the country’s Ministry of Economic Affairs under the label Dutch Digital Delta. “My team is organizing cooperation between public and private partners because there are some fundamental issues that need to be solved before services are introduced into the market at scale. “

Chief among them is digital identity. Blockchain solutions for the identification of persons, legal entities and objects are at the top of the agenda

“We have a number of banks on board, insurance companies and utilities and we have the Dutch regulatory authority on board and we all feel that identity is the key for all of these blockchain applications,” says Penning de Vries. “So where are we? We are at the stage of defining prototypes, defining what we really want in terms of identity management.”

Working on identification processes requires a focus on both interoperability and standardization and requires the will to work across government agencies and industries.

One of the items on the agenda for 2017 is creating clarity about the relationship with and the speed of rollout for all government organizations that are considering using blockchain to create identities that can be used in government registers such as the State Service for Identity Data (RIVG), Dutch Chamber of Commerce as well as the basic registrations of the police and the Ministry of Security and Justice.

Academia is also playing a strong role. The Netherlands is home to Delft University of Technology, which hosts one of Europe’s largest research groups on blockchain technology. Its work combines running code with novel approaches to broaden and strengthen the cybercurrency field, says Johan Pouwelse, head of the university’s blockchain lab.

The university is taking part in a new blockchain consortium focused on logistics involving the Port of Rotterdam, operator of Europe’s largest shipping port. The Netherlands-based effort includes support from a number of local and regional institutions, including,Royal Flora Holland, a major floral auction house, the Netherlands Organization for Applied Scientific Researh and Dutch bank ABM Amro, among others.

ABM Amro has also teamed with IBM on a blockchain trial for real estate transactions to record and exchange information using an application called Torch.

The bank has also explored how blockchain might solve issues in financial auditing and compliance and in Financial Recovery and Restructuring. And ABN Amro and RaboBank are among multiple banks who have joined a project designed by SWIFT, the world’s largest financial messaging system, designed to determine if blockchain technology can help banks reconcile their international nostro accounts in real time.

Like ABM Amro and Rabobank most large Dutch banks have intensified their blockchain initiatives in 2016–17 and are evolving from the paper-based exploratory phase to mobilizing proofs-of-concept across different business lines, according to Accenture.

In 2016, ING, another Dutch bank, worked on blockchain projects with partners inside and outside the bank, including consortiums such as R3, the Dutch Central bank, the Dutch Payments Association and the European Banking Forum. The bank also partnered with Société Générale and trading house Mercuria to test a live oil trade using blockchain

In all, ING worked on 27 proofs-of-concept in six business areas: payments, trade finance and working capital solutions, financial markets, bank treasury, lending and compliance and identity, according to Accenture. Tangible key performance indicators (KPIs) were used to validate the results and suitability of these proofs-of-concept, according to an article written by Accenture Netherlands consultants. For instance, the PoC on trade finance showed considerable gains in an otherwise paper-based process, resulting into potential cost savings of 10–15% and revenue uptake of 15%.

For its part, SNS Bank moved out of traditional banking areas to test out the use of blockchain in addressing inefficiencies in the healthcare system, according to Accenture.

Other trials in the Netherlands involve healthcare and the energy sector. For example, IBM, TenneT and Sonnen are working on a trial in the Netherlands and Germany that explores the use of a permissioned blockchain network to integrate flexible capacity supplied by electric cars and household batteries into the electrical grid.

Dutchchain is developing a programmable money software solution on the blockchain that allows a sender to program the destination into the transaction, ensuring a payment is spent for a specific purpose. It has co-developed such a smart voucher system with the Dutch city of Groningen, allowing government payments to 20,000 citizens with a minimum income to be paid in smart digital vouchers instead of euros.

Nestegg, a Dutch startup which won a prize at the last Dutch hackathon, aims to uses the blockchain to offer fractional ownership in the sustainable infrastructure that powers a person’s future, such as power from windmills and rides in autonomous cars, giving people an alternative to traditional pensions. Each individual would receive the value created from his or her investment, traceable to the percentage of ownership in the asset. The venture is backed by APG, Europe’s largest pension asset manager and administrator.

Ledger Leopard, another startup, offers an API library for developers and is building blockchain applications for big corporates and government agencies that don’t want to develop the technology themselves. It adds blockchain as a software application that integrates with existing technology, including mobile networks. Ledger Leopard’s website is scheduled to go live on Sept. 28.