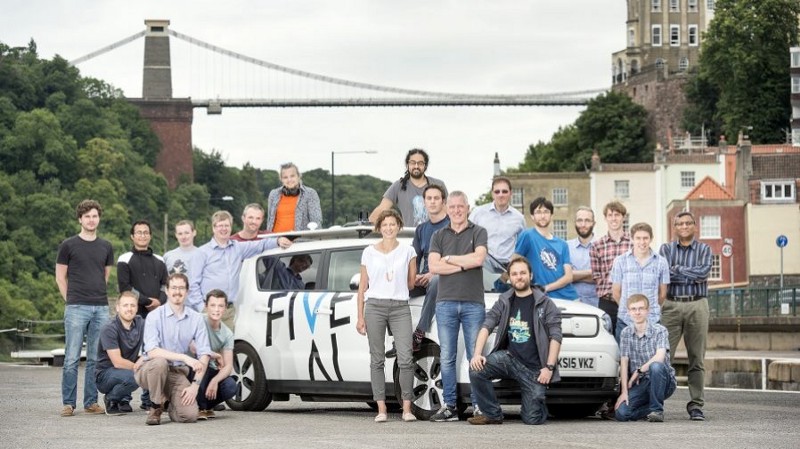 FiveAI uses multiple sensors, including high resolution cameras, radar, ultrasound and LiDAR, a laser-based sensor, to provide an accurate scan of a vehicle’s surrounding, track how far away things are, measure distances and create a dynamic model of the physical world. It says its use of artificial intelligence (AI) limits the need for dense prior maps; its software stack instead determines tracks from point-to-point, much like a human, based on a much simpler map.

To ensure self-driving cars are safe, FiveAI is currently collecting data to help its AI understand human decision making so it can predict how drivers, pedestrians and cyclists might react in various scenarios.

In addition to venture capital financing, FiveAI has a grant from the U.K. government for StreetWise, a project it’s working on with Transport for London, the Transport Research Laboratory, Oxford University, insurer Direct Line and others to develop a self-driving car pilot for London to reduce traffic congestion and free up parking spaces. StreetWise is expected to begin trials in late 2019.

FiveAI CEO Stan Boland has led and built four European technology companies over the last 19 years, creating businesses purchased for over $1.5 billion by Chinese and American acquirers. Building billion dollar plus tech companies that are born in Europe and stay in Europe has long been a goal for Boland. To that end, he has publicly said he wants FiveAI to become Europe’s equivalent of Uber, the global ride-sharing service.

But Uber is far from being FiveAI’s only competition. Google, Baidu and major car companies are all entering the autonomous vehicle space. And startups gunning for the sector, such as Boston-based nuTonomy, are starting to gain some real traction.

nuTonomy’s software and sensor system can be installed on any automobile make or model to produce a fully autonomous vehicle. In 2016 the MIT spin-off, which was named a 2017 World Economic Forum Technology Pioneer in June, became the first company in the world to test its autonomous vehicle mobility-on-demand service during a public trial in Singapore. nuTonomy has been testing its self-driving cars on public roads in the Seaport section of Boston, Maine since early 2017 and the company plans to launch the world’s first commercial autonomous vehicle mobility-on-demand service in 2018 in Singapore.

That’s not all: nuTonomy and ride-sharing service Lyft have forged a strategic R&D partnership focused on optimizing the end-to-end experience of passengers in autonomous vehicles and the U.S. startup also has a non-exclusive strategic partnership with Groupe PSA, one of the largest automobile manufacturers in Europe, to integrate its autonomous vehicle system into Peugeot 3008 vehicles for on-road testing. In addition to Groupe PSA, nuTonomy has partnered with four other car manufacturers to test its system on different car platforms: Renault, Mitsubishi, Lincoln, and Land Rover.

Other startups are targeting segments of the autonomous vehicle market. In the past two weeks alone at least three startups working on sensor technology for autonomous cars have raised financing, notes research firm CB Insights: Canada’s LeddarTech ($101 million in a Series C round), Israel’s Innoviz Technologies ($65 million in a Series B round), and the U.S.’s Metawave ($7 million seed round).

LeddarTech and Innoviz are among a number of startups developing solid-state LiDAR, a laser based sensor providing an accurate scan of a vehicle’s surrounding, while Metawave, a spinout of PARC, a Xerox company, is focused on combining ultra-fast beam steering with AI algorithms, with the aim of enabling 3D imaging, superior identification and classification of objects, non-line-of-sight object detection, and accident anticipation by analyzing traffic patterns, with smart functionality in all-weather conditions.