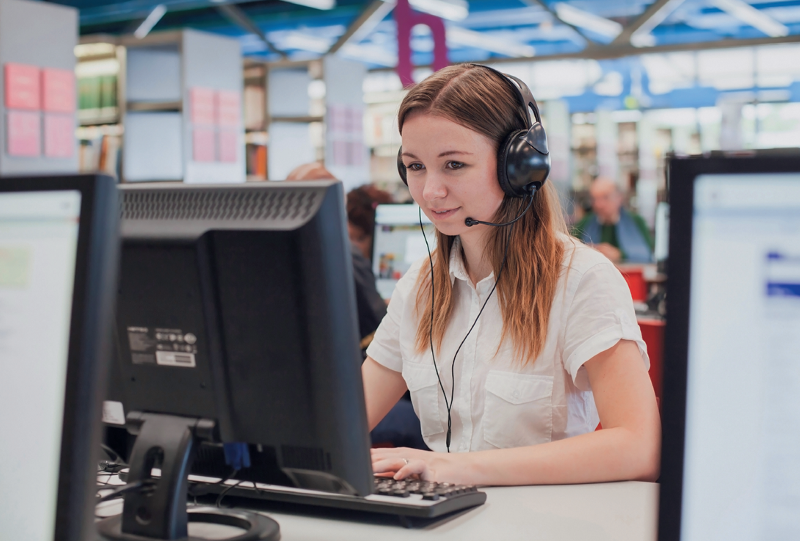 AI Is Changing the Way Companies Interact With Their Customers

Within five years, more than half of clients will select a company based on its artificial intelligence.

KLM Royal Dutch Airlines is winning acclaim for a service that uses artificial intelligence not only to send customers booking confirmations,check-in notifications, boarding passes and flight status updates but also to answer their questions.
The service uses a chatbot, a conversational computer program that customers can interact with via a messaging interface like SMS, Facebook Messenger, Apple iMessage, Slack, Kik, Telegram and WeChat. The result: huge time savings for customer service agents, who can instead focus on customers with more pressing or complicated needs. Beyond the airline industry, chatbots are being used in fields such as retail, banking, insurance and health, signaling a sea change in the way customers converse with companies or engage in commerce.

“AI is making the user interface both simple and smart — and setting a high bar for how future interactions will work,” says a recent report from Accenture. “It will act as the face of a company’s digital brand, be a key differentiator — and become a core competency demanding C-level investment and strategy.” Within five years, more than half of customers will select a company’s service based on its AI, the report says.
In the same way that a customer service representative can please or anger a customer, an AI system will represent a company’s brand and leave a lasting impression. In the United States alone, businesses lose an estimated $1.6 trillion annually due to poor customer service, according to the Accenture report. In addition, it says, 68% of consumers say they will not go back to a brand once they have switched.

But get the customer experience right, and there’s a much larger opportunity, the report notes. Instead of interacting with one person at a time like a human representative does, a bot can interact with an infinite number of people at once — based on the skills built for it — and maintain a powerful, consistent brand experience in every interaction. KLM’s bot uses deep-learning algorithms that enable it to ingest vast volumes of historical customer service data. This history is then integrated with customer service. When a new message comes in via a digital channel such as email, chat, social media or text, the bot takes three actions: it predicts and auto-fills metadata related to the incoming message; it proposes the best response to the incoming message and shows it to the contact center agent for approval or personalization before sending it to the customer; it automatically answers questions that exceed a certain confidence threshold.
Instead of using a website or mobile app, KLM customers can get things done simply by chatting with a bot and asking questions naturally via text like “Can I bring my puppy on the flight?” This helps KLM handle a huge volume of messages. The airline says it has more than 22 million social-media followers, who mention it on various platforms more than 100,000 times a week. KLM’s team of 235 social media service agents engage in 15,000 conversations a week across all its social platforms, offering 24/7 service in 10 languages.

Other companies are also increasingly using bots to help with customer service. For example, Burberry’s Facebook Messenger bot, launched during London Fashion Week last year, shares new collections and doubles as a live customer service portal. The fastfood outlets Burger King and Wingstop show users nearby locations and menu choices, take and confirm orders, estimate when a customer’s order will be ready and enable payments. Credit Agricole’s health insurance offering is represented by a bot named Marc while Allianz has introduced a chatbot called Alli that offers assistance 24/7 to answer questions about a wide range of insurance products.

Bots are also being used as effective marketing tools, says Adelyn Zhou, head of marketing at TOPBOTS, a research and advisory company that helps businesses build successful bot experiences. Examples include:
• H&M’s bot, which is accessed via the messaging app Kik, offers teens
on-demand personal styling. Users can share a piece of clothing and the bot will pull up items from the clothing lines it carries to build a whole outfit.
• Sephora’s Kik bot shares videos, tutorials and tips for eye, lip, face, hair and nail care. The bot also recommends products consumers can pick up online or at Sephora’s retail stores.
• Victoria Secret PINK uses Kik to enable teenage girls to find the perfect bra. Teens answer a few questions about their current bra fit in order to receive customized size and PINK product recommendations.
• The Mondrian hotel in London uses a bot to give guests a guided tour of the hotel and explain hospitality and entertainment services on offer.

Some bots are programmed with scripted answers; others can understand natural language and have a human-like conversation with clients. Today’s chatbots “are primitive,” says Jeff Keni Pulver, a serial entrepreneur, angel investor and founder of MoNage, a conference focused on the communications platforms of the future. Soon there will be less dependency on apps and websites, he says. “In the near future, conversational interfaces will use voice, biometrics, augmented reality, virtual reality and some other forms of reality yet to be defined — including, one day, perhaps, a direct interface to the human brain.” Our preferences along with the tasks we want to accomplish will be embedded in computer code, and that code will interact with other pieces of code, completing transactions such as the purchase of a plane ticket or an article of clothing on our behalf, says Pulver.

While it is fully expected that bots will use deep learning to personalize service and know what we want before we know it, “we are not there yet,” says TOPBOTS’ Zhou. Still, today’s bots are exciting to marketers because they can illicit far more information from customers than can be obtained by test groups or asking people to fill in forms, helping companies gather valuable intelligence about what customers want, says William Godfrey, who until recently was a product manager at the advertising agency Ogilvy’s digital experiences studio in London. Godfrey now works for Founders Factory in London, which is helping big corporations understand and launch AI services. “Chatbots offer companies the opportunity to do millions of user interviews constantly,” he says. “If that is properly leveraged then it eclipses the current capabilities of business that I’ve seen.” An uptick in customer engagement is expected as the technology disappears all together and people begin speaking
with their devices rather than texting. That is already starting to happen through Alexa, a user interface operated by Amazon that can understand
and respond to natural language commands.
Major brands see it as a great new way of interfacing with customers and have started using the Alexa Skills Kit to create code that integrates their own products into the platform. “Voice-first services will become major players in customer support over the next five years,” says Adam Marchick, the CEO and co-founder of VoiceLabs, which provides voice experience analytics.
The American bank Capital One, for example, allows consumers to check
balances, review transactions, make payments, and conduct other banking
services using voice command. And drivers of Ford vehicles equipped with its SYNC 3 voice-activated technology will soon be able to order from Starbucks by saying, “Alexa, ask Starbucks to start my order,” utilizing Amazon’s voice platform.
Although studies by San Francisco-based VoiceLabs indicate that Alexa services do not yet have the same stickiness as apps and are hard to fordevelopers to monetize, voice-powered AI platforms are expected to become a bigger platform than mobile phones and a boon to business.

So what should companies do to prepare? The way people interact with
technology is becoming a primarywayforcompanies to distinguish themselves
from the competition, says the Accenture report. It advises companies to spend the next 12 months designing “a new customer journey where AI
serves as a frontline brand ambassador for customer service interactions,
communications and engagements with customers.”
In sum, says the report, the top management at companies have to stop thinking about AI as a technology tool and give it the priority and investment
that matches the role it’s about to take over — as the face of the brand.