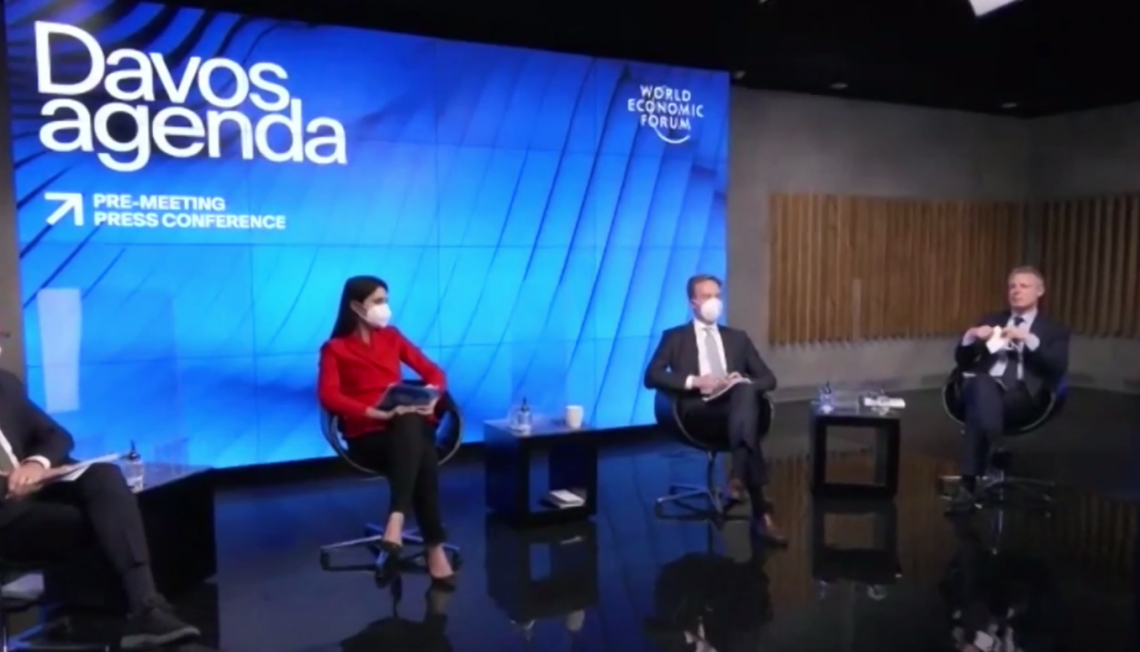 The virtual meet-up is taking place during the week that world leaders usually convene in Davos, Switzerland for the Forum’s annual meeting. Due to the pandemic the meeting is taking place online, with a physical meeting planned in Singapore planned as a follow-up in late May.

During a pre-meeting press conference this week with senior Forum staff (see the photo) Klaus Schwab, the Forum’s Founder and Executive Chairman, talked about how important it will be in a post-pandemic world to not just to establish sound economic growth but also ensure that the world is “more resilient, more inclusive and more sustainable, and above all to restore trust.”   Tackling the climate crisis, designing fairer economic and social systems and ensuring technology will be used for good, will require multilateral systems that are fit to meet the challenges of the 21st century, he said. “In the context of the COVID-19 pandemic, the need to reset priorities and the urgency to reform systems have been growing stronger around the world,” said Schwab. “Rebuilding trust and increasing global cooperation are crucial to foster innovative and bold solutions to stem the pandemic and drive a robust recovery. This unique meeting will be an opportunity for leaders to outline their vision and address the most important issues of our time, such as the need to accelerate job creation and to protect the environment.”

Each day of the five-day program will have its own in-depth focus:

*. Harnessing the technologies of the Fourth Industrial Revolution (28 January)

Sessions that promise to be of interest to our readers include “Skilling The Global Workforce, “Averting A Cyber Pandemic”, “Fostering AI Leadership”, “Implementing Stakeholder Capitalism”, “Unlocking Innovation To Transform Food Systems” and “Accelerating Green Energy Transition.”

Taking part in the discussions next week will be heads of state and government including Narendra Modi, Prime Minister of India; Emmanuel Macron, President of France; Angela Merkel, Federal Chancellor of Germany;Ursula von der Leyen, President of the European Commission; and Xi Jinping, President of the People’s Republic of China.

Here’s how you can follow the Davos Agenda. During the Davos Agenda the Forum is expected to launch several new initiatives to accelerate the race to net-zero emissions, ensure the ethical use of technology, champion new standards for social justice and to close the digital divide. The Innovator will provide in-depth coverage of the meeting on Friday January 29.

Microsoft has invested in Cruise, the General Motors driverless car unit, in a $2bn funding round that gives the autonomous driving company a $30bn valuation. Cruise, which was bought by GM for “more than $1bn” in 2016, when it had just 40 employees, now has almost 2,000 staff and accounts for more than 40 per cent of GM’s $71.5bn market capitalisation. Its latest investment round puts it head-to-head with Waymo, the Google sister company, as the world’s most valuable autonomous driving start-up. Waymo raised $3.2bn last year at an undisclosed valuation that two people said to the FT was “more than $30bn”. The investment in Cruise is Microsoft’s first major foray into driverless cars, although the software company does have a “connected car” business that supplies “digital chassis” and cloud services to the likes of Volkswagen, BMW and Ford.

China’s Zhejiang Geely Holding Group, which owns Volvo Cars and holds 9.7% of Daimler, said it has signed an agreement with Tencent Holding to develop smart vehicle cockpit and autonomous driving.The deal with Tencent, which has investments in EV makers including Tesla and Nio, is the third recent partnership by Hangzhou-based Geely with companies involved in the tech sector.Geely said this month it would launch a smart electric vehicle company with Baidu and later that it would form a separate venture with Foxconn to provide contract manufacturing for automakers.

Spanish food delivery startup Glovo has struck a deal with Swiss real estate firm Stoneweg to invest €100 million to expand its network of convenience stores.Stoneweg will build and refurbish real estate for the “dark stores,” which are delivery-only convenience markets, in countries where Glovo is already operating, such as Spain, Italy, Portugal and Romania, Glovo said in a statement. Glovo has agreed to occupy the sites for an unspecified period of time and the Barcelona-based company aims to have 100 of the units by the end of the year, up from 18 now.“We see this as the third generation of commerce as there is the traditional way of shopping, then e-commerce and now the quick commerce in which delivery comes to your house in 30 minutes,” Glovo Chief Executive Officer Oscar Pierre said in an interview. The closely held company started operating dark-supermarkets in late 2019 to diversify away from restaurant deliveries.

Pizza Hut To Launch Delivery By Drone In Israel

Restaurant tech company Dragontail Systems has joined up with Pizza Hut for pizza delivery by drone in Israel. To make this type of airborne delivery happen, Dragontail is integrating drones into its Algo Dispatching System, which uses AI to manage food preparation and delivery workflow. The delivery drones won’t be dropping pizzas off at people’s front doors, however. Rather, they will fly pizzas to remote designated landing zones where delivery drivers will pick them up for last mile of the delivery. This remote drop-off hub approach is gaining traction with delivery companies around the world. IFood is using this model in Brazil, and in the U.S., Uber is taking this approach with its drone delivery program.

NLP algorithms designed for words and sentences can also be used to interpret genetic changes in viruses—speeding up lab work to spot new variants.

British Hospitals Use Blockchain To Keep Track Of COVID-19 Vaccines

Two British hospitals are using blockchain technology to keep tabs on the storage and supply of temperature-sensitive COVID-19 vaccines, the companies behind the initiative said. It is one of the first such initiatives in the world.

The European Commission and European Central Bank are working together to investigate the policy, legal and technical questions emerging from a possible introduction of a digital euro.

Software development services provider Sequoia Holdings said its employees can now receive a part of their salary in cryptocurrencies, should they choose to.

Google Shutting Down Loon, Which Used Balloons Instead Of Cell Towers For Internet Connectivity

Google parent Alphabet is shutting down its Internet balloon business, Loon, which aimed to provide a less expensive alternative to cell towers, said “the road to commercial viability has proven much longer and riskier than hoped.” Founded in 2011, Loon aimed to bring connectivity to areas of the world where building cell towers is too expensive or treacherous by using balloons the length of tennis courts to float solar-powered networking gear high above the Earth. But the wireless carriers that Loon saw as buyers of its technology have questioned its technical and political viability.

Intel said it was the victim of a hacker who stole financially sensitive information from its corporate website on January 21, prompting the company to release its earnings statement ahead of schedule.