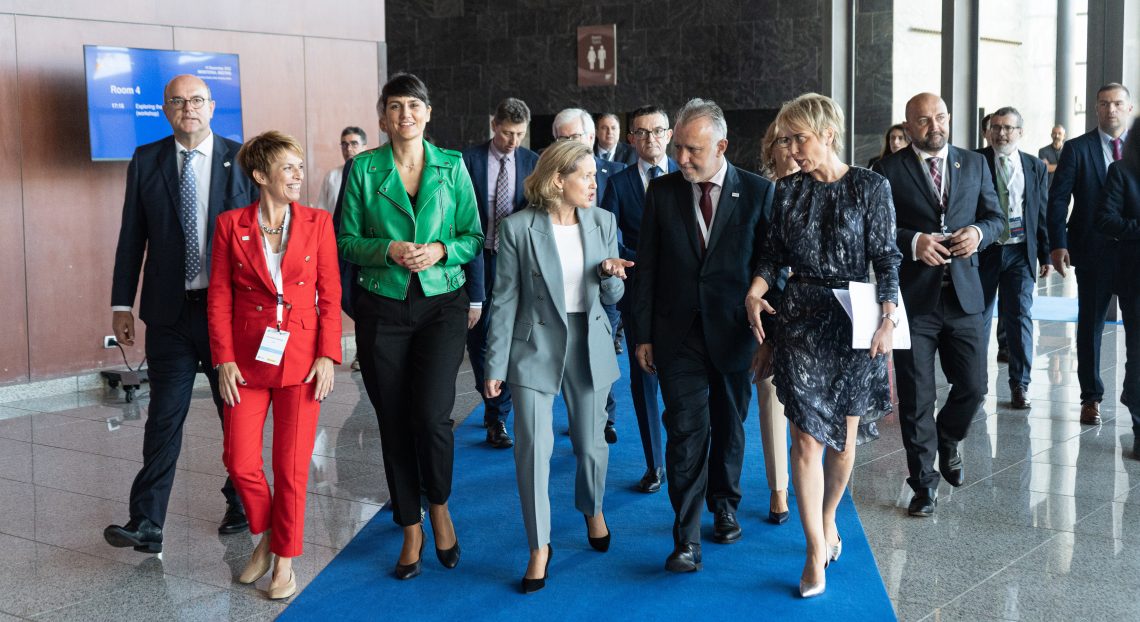 OECD countries gathered this week in Gran Canaria, Spain for the 2022 Digital Economy Ministerial Meeting adopted what is being billed as a landmark agreement to safeguard privacy and other human rights and freedoms by limiting law enforcement and national security agencies access to personal data. The accord is expected to build trust and ease global data flows.

Four principles aimed at increasing cybersecurity were also launched as well as a “Declaration On A Trusted, Sustainable and Inclusive Digital Future”, which among other things, recognized that seizing the opportunities and mitigating the risks presented by accelerating digital transformation is a critical responsibility of government. To that end, the OECD announced that it is launching a Global Forum On Technology, with the stated aim of helping policy makers keep abreast of technology changes and anticipate their impact on society and business.

Decisions taken at this week’s ministerial meeting will “shape a vision for the future of the digital economy and the way we think about and act on digital policy for years to come,” Ulrik Vestergaard Knudsen, OECD Deputy Secretary General said in a December 15 closing press conference.

The OECD Declaration on Government Access to Personal Data Held by Private Sector Entities, which was signed by 38 OECD countries and the European Union, seeks to improve trust in cross-border data flows -which are central to the digital transformation of the global economy -by clarifying how national security and law enforcement agencies can access personal data under existing legal frameworks.

The International Chamber of Commerce, which represents millions of businesses worldwide, said it welcomed the declaration because it brings” important clarity for business and individuals alike.”

The ability to transfer data across borders “is fundamental in this digital era for everything from social media use to international trade and cooperation on global health issues, OECD Secretary-General Mathias Cormann, said in a statement. “Yet without common principles and safeguards, the sharing of personal data across jurisdictions raises privacy concerns, particularly in sensitive areas like national security.”

A rift between the U.S. and the EU is a case in point. In 2020 thousands of companies found themselves in a legal muddle after Europe’s top court struck down the previous data transfer accord on concerns about U.S. intelligence agencies accessing Europeans’ data.  The two sides struck a preliminary deal in March and President Joe Biden followed up in October with an executive order setting out new safeguards for the activities of U.S. intelligence gathering and creating a two-step system of redress, first to an intelligence agency watchdog ,then to a court with independent judges.

This week European Union took a step closer to sealing a data transfer pact with the United States when it issued a draft decision saying U.S. safeguards against American intelligence activities were strong enough to address EU concerns.

While it is unclear whether the timing of the two announcements was deliberate or a coincidence, the OECD declaration, which was two years in the making, stemmed from growing concerns that the absence of common principles in the sensitive domains of law enforcement and national security could lead to undue restrictions on data flows, as it has with data transfers between the U.S. and EU .  The OECD brought together country experts in data protection, national security, and law enforcement from a much broader group of countries.

“What the experts found is that we actually have remarkedly similar approaches,” Nathaniel Fick, the U.S.’s Ambassador At Large, Bureau of Cyberspace and Digital Policy, said during a December 14 panel discussion at the ministerial meeting.  “Of course, each of our countries’ legal systems may implement the principles in slightly different ways but there is far more that unites us then divides us,” he said. “Our common approach is dramatically different from authorization countries.”

This week’s declaration complements the OECD Privacy Guidelines, which were adopted in 1980, and serve as the basis of many countries’ privacy rules. Last updated in 2013, the Privacy Guidelines “provide a common reference point for the protection of personal data and aim to facilitate cross-border data flows while upholding democratic values, the rule of law and the protection of privacy and other rights and freedoms,” according to the OECD.  However, the OECD privacy guidelines allow for exceptions for national security and law enforcement purposes. The new declaration sets out how legal frameworks regulate government access; the legal standards applied when access is sought; how access is approved, and how the resulting data is handled, as well as providing transparency to the public.

Looking To The Future

The idea for the proposed Global Forum On Technology stems from an experimental meeting in London organized last year during the UK Presidency of the G7, that aimed to narrow the gap between advanced technologies and policy making, said Wycoff.  The Global Technology Forum, which will be led by the U.S. and the UK and is expected to be open to non-OECD countries, will seek to educate policy makers on the risks and opportunities posed by future technologies.

“Technology is evolving very quickly and that means we must evolve as well,” Vestergaard Knudsen said when speaking about the Global Forum on Technology during the closing press conference. “We and our policies must be more agile, more proactive. We need to get ahead of the long-term effect of technologies, be they digital or otherwise.”

The U.S. Energy Department said December 13 that scientists at a federal research facility had achieved a breakthrough in research on nuclear fusion, long seen as a potential source of clean, virtually limitless energy.A controlled fusion reaction at Lawrence Livermore National Laboratory in Livermore, Calif., produced more energy than it consumed, Energy Secretary Jennifer Granholm and other government officials said during a press conference from DOE headquarters in Washington, D.C. The milestone, known as fusion ignition, is unprecedented, according to the Department of Energy.

Researchers at the lab’s multibillion-dollar National Ignition Facility have been studying nuclear fusion for more than a decade, using lasers to create conditions that cause hydrogen atoms to fuse and release vast amounts of energy. Since the facility began operations in 2009, the goal of a fusion reaction that produces a net gain of energy—a key step toward transforming fusion into a practical source of energy—had eluded scientists.

In Europe, companies are also advancing the application of fusion via laser. Marvel Fusion, a German startup, is already working with manufacturers TRUMPF and Thales to develop lasers suitable for future power plants. “Europe could become the pioneer in laser-based fusion technology,” Moritz von der Linden, CEO of Marvel Fusion, said in a statement reacting to the U.S. announcement. The Extreme Light Infrastructure in Romania, Hungary, and the Czech Republic, as well as the Centre for Advanced Laser Applications at Ludwig Maximilian University in Garching, are among the most powerful laser facilities in the world, with peak outputs of up to ten petawatts. In addition, the leading manufacturers of industrial short-pulse laser systems, TRUMPF and Thales, are in Germany and France. “Now is the chance for politicians and investors to help in the realization,” von der Linden said. “The age of fusion has dawned. Germany and Europe have the best chance to take a leading role in fusion energy.”

Synhelion, one of The Innovator’s 2022 Startups Of The Week, raised  $23.7  million in additional funding this week to help accelerate availability of sustainable aviation fuels (SAF) from backers that included existing investors Swiss International Airlines and CEMEX Ventures, the corporate venture arm of the Mexican cement company..

The clean energy company evolved from the Swiss Federal Institute of Technology (ETH Zurich) in 2016 to decarbonize transportation.  The process it developed for green fuels works like this: when the sun is shining, solar radiation is reflected by a mirror field, concentrated onto a receiver, and converted into high-temperature process heat. The generated heat is fed to a thermochemical reactor that produces synthesis gas. This is then processed into fuels by standard gas-to-liquids technology such as the Fischer-Tropsch process. The set-up also includes thermal energy storage, which enables fuel production around the clock. The end product is solar kerosene, diesel, or gasoline that can be burned in standard engines. Synthelion’s promise of a green alternative comes as decarbonixation targets are being imposed on the aviation industry. Additionally, long-distance transportation such as freight, shipping, and aviation requires extremely high energy densities that current battery technology cannot reach. Solar-to-liquid fuels can achieve these densities and are therefore poised to be an ideal energy carrier, according to the company.

Visa plans to invest $1 billion over the next five years in Africa to capitalize on the emerging economy’s rapid growth in digital payments, the company said at the U.S.-Africa Leaders Summit on December 14. The investments in Africa shine a new light on a major growth opportunity on the continent where cash is likely to be challenged in coming years as e-payments gain momentum, according to a September McKinsey report. Africa’s booming e-payments market is expected to see revenues grow by nearly 20% a year, reaching around $40 billion by 2025, compared with about $200 billion in Latin America, the report said.

Rabobank has executed a series of real-time euro commercial paper transactions in a blockchain pilot the lender says demonstrates the technology’s potential to provide borrowers and asset managers with real-time liquidity. The Dutch bank executed 19 transactions, more than €40 million in notional, one-week maturity euro commercial papers in EUR and GBP in a fixed and floating format, from the Dutch State Treasury Agency and Rabobank Treasury in the Netherlands and Erste Bank in Austria to UK-based asset manager Northern Trust Asset Management. The transactions were executed, distributed and settled in under 30 minutes, as opposed to the standard two business days, providing close to real-time liquidity to Northern Trust Asset Management.