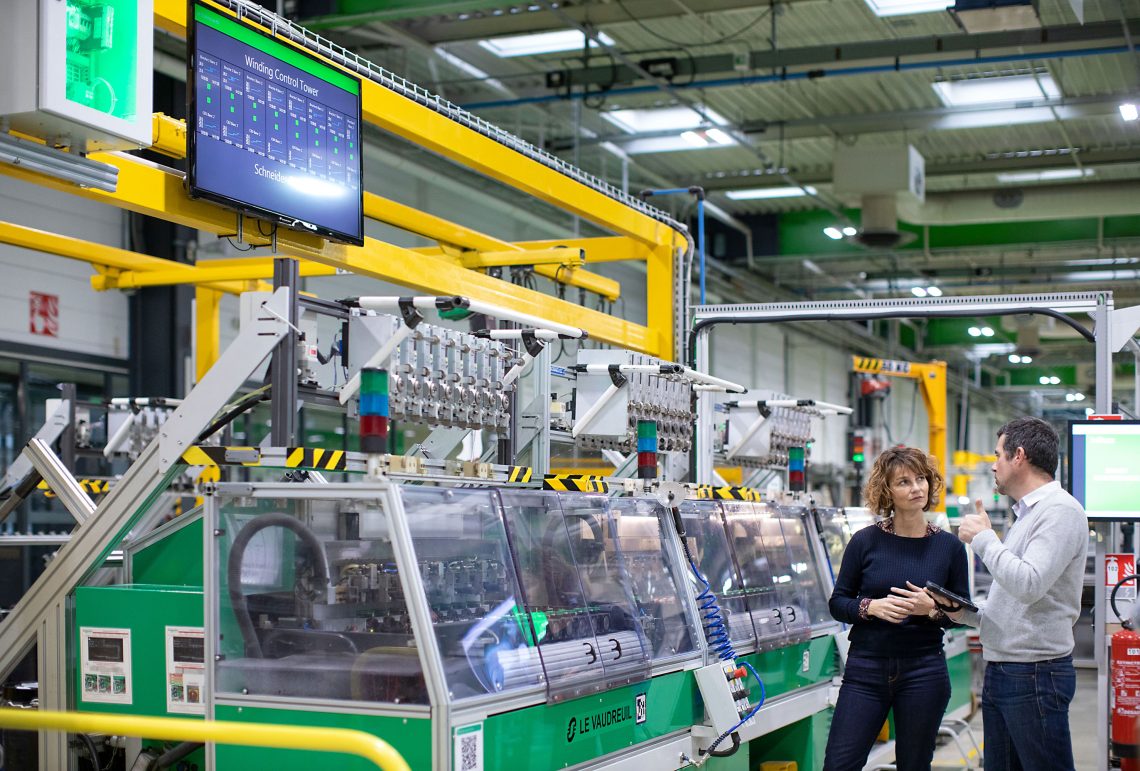 Schneider Electric’s digital transformation has helped its factories become greener. Now it’s being held up as an example to manufacturers in other sectors.

The company’s Le Vaudreuil facility in France’s Normandy region is one of three manufacturing sites that were recognized as “sustainability lighthouses” on March 30 by the World Economic Forum. These lighthouses “defy the conventional wisdom that environmental responsibility is inherently at odds with productivity and, by extension, profitability,” says a new World Economic Forum white paper entitled The Global Lighthouse Network Playbook for Responsible Industry Transformation.

“Lighthouses reveal how successful deployment of Fourth Industrial Revolution technologies such as artificial intelligence and advanced analytics can augment green measures, delivering sustainability returns while bolstering production efficiency – they are transforming operations at scale in a responsible manner that prioritizes people and the planet,” says Federico Torti, the Forum’s Initiatives Lead, Advanced Manufacturing and Value Chains.

Some 66% of the lighthouses in the Forum’s community of manufacturing facilities and value chains made sustainability improvements by reducing consumption, resource waste and carbon emissions, and 82% increased productivity. The Forum’s new playbook outlines how manufacturers that are effectively scaling Fourth Industrial Revolution technologies are achieving all these results at once.

The Power Of Digital Makes The Difference

When announcing the addition of 13 new lighthouses on March 30 Schneider Electric’s Normandy plant was singled out by the Forum for its outstanding environmental footprint reductions.  The Normandy plant usesindustrial Internet of things (IIoT) sensors connected to digital platforms to unlock data to optimize energy management by 25%, reduce material waste by 17% and minimize CO2 emissions by 25%, with an objective to be net-zero carbon by 2025, without offset, ahead of the global Schneider Electric pledge. It is also equipped with a zero-reject water recycling station connected to cloud analytics and monitored by an artificial intelligence (AI) model to predict process drifts, leading globally to 64% in water reduction.

The plant is one of 100 Schneider Electric smart factories and distribution centers that serve as a showcase for new technologies. Le Vaudreuil was recognized by the Forum as as Advanced Lighthouse in 2018. It took years of digital upskilling to get there, says Thomas Bellion-Jourdan, Vice President Global Supply Chain Power Products, Europe, who oversees the Le Vaudreuil facility and nine other Schneider Electric factories. It has paid off in more ways than one, he says. The Normandy facility earned the latest accolade by building on its advances in digital transformation to become more sustainable. Schneider Electric views sustainability as core to the future of its business, he says.  It has pledged to be Net Zero, without carbon offsets, by 2030 for Scope 1 and 2 emissions and by 2050 for its global supply chain, which covers Scope 3. It is not starting from scratch. It began work on reducing its energy consumption in 2014.

“Over the last few years our efforts have been accelerated by leveraging digital,” says Thomas Bellion-Jourdan. “It is the power of digital that is making the difference.”

The Normandy factory demonstrates two concrete use cases. One of them is focused on energy monitoring of buildings and production equipment.  It uses Schneider Electric’s EcoStruxure Building Operation solution to connect hardware, software, and services over an Ethernet IP backbone as well as the company’s own Power Monitoring Expert and Resource Advisor software to consolidate data from the factory’s sensors, analyze it to understand consumption at a granular level and develop an action plan.

The second use case focuses on a patented process that Schneider Electric uses to make silver tips that are brazed on copper and used to ensure electrical connectivity inside contactors in electrical power circuits produced at the Le Vaudreuil plant. The plant sends the finished contactors to many other Schneider Electric factories. There were some issues in the production of the paste that goes into the silver tips and the company was not able to identify the root causes to fix them properly. Issues with the chemical composition were only discovered after batches were finished. Now, thanks to digital technology, it can be tracked in real-time. Using information gathered by the Industrial Internet of Things and AI the chemical composition can be adjusted on the fly, if needed. That’s crucial for the reduction of the company’s environmental footprint. The chemical process used to make the silver paste composition generates dangerous waste with Co2 Scope 3 impact. The new process not only reduces waste and energy consumption in the recycling of the water used in the process, it also decreases pressure on employees as mistakes in the silver chemical process are costly, says Bellion-Jourdan. The solution does not bypass employees, he says, “We still leverage their strong chemical process knowledge but use technology to improve the performance and reduce the stress.”

The Le Vaudreuil facility is reaping the benefits of starting its digital transformation early, he says.  “We started some years ago to test digital technologies. Some of them did not go further than a POC [proof of concept trial] because the value was not there. We selected and scaled out the right technologies to focus on and extract value from and really focused on upskilling both blue collar and white-collar workers. You need to train and develop your teams continuously,” he says.

“Machine learning and artificial intelligence are the next challenge,” says Bellion-Jourdan. “We have progressively built the bricks of the foundation and now it is time to accelerate and really leverage AI.”  Schneider Electric’s central team of data scientists will help grow and support local initiatives, he says.

Schneider Electric’s Smart Factory in France is not the only one of its manufacturing sites that is advancing due to digital technologies. The company’s plant in Hyderabad, India was recognized by the Forum as an Advanced Lighthouse on March 30— the fifth Schneider Electric factory to receive this distinction to date. The others are in Wuxi, China, Lexington, Kentucky, and Batam, Indonesia.

Part of what makes the Global Lighthouse Network unique is that it is not centred on any one type of manufacturing: it serves as a platform for the exchange of best practice from manufacturers of diverse products ranging from cutting-edge microchips powering digital devices, cars people drive and the batteries and fuels powering them, pharmaceuticals and
detergents.

Two other corporates were singled out by the Forum on March 30 for their factories’ outstanding environmental footprint reductions. The Janssen Pharmaceutical Companies of Johnson & Johnson in Cork, Ireland  is using digital technologies to optimize its processes and reduce carbon emissions per kilogram of product by 56%, while the site footprint has expanded by 34% to meet growing business needs. Western Digital Technologies, which develops and manufactures data storage solutions,  achieved a reduction in energy by 41%, water consumption by 45% and material waste by 16% through a vertically integrated smart factory in Penang, Malaysia. Fourth Industrial Revolution technologies, such as Internet of things  sensors, digital twin modelling, analytics powered plant management system and lights-out automation with machine learning, increased their sustainability impact. The factory’s efforts earned Malaysia Green Building Index (GBI) certification for the site.

A Platform For The Exchange Of Best Practice

Based on learnings from the lighthouses in its community the just-released  Global Lighthouse Network Playbook shows how companies like Schneider Electric can transform at scale and become more sustainable by leveraging the power of technology.

“As digitalization, climate change and global disruptions continue to reshape the foundations of manufacturing, we hope more organizations can draw inspiration from these leaders to accelerate their own digital transformation journey towards a responsible future of operations that works for people, society and the environment” says the Forum’s Torti.