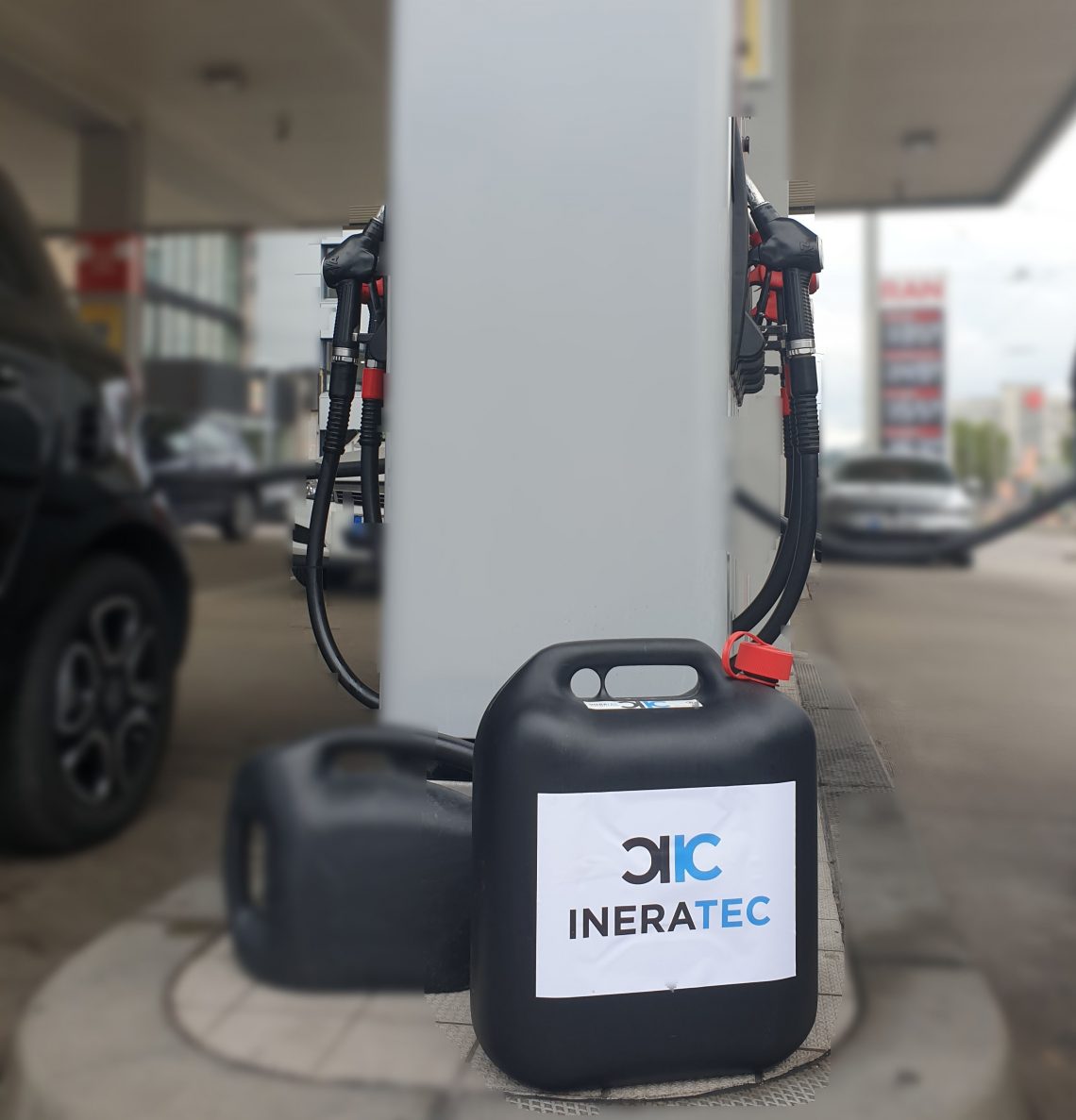 Getting to Net-Zero will require these hard to abate sectors to reduce their dependence on fossil fuels. That’s where Ineratec comes in. The German scale-up is developing technologies for the production of carbon-neutral fuels for the aviation, shipping and automotive sectors and it is also creating carbon neutral feedstock for the chemical industry.

There is very strong interest in e-fuels,” says Tim Böltken, co-founder and managing director of Ineratec. “Everyone is trying to get their hands on it.”

To meet demand, “the production capacities for carbon-neutral fuels and chemicals must be scaled up fast,” says Böltken .“We want to be the pioneers. We are already building our own plants in the megawatt scale rather than wait for all the regulations to be in place and are looking for large industrial partners who believe in this mission.”

On January 20th  Ineratec announced that it had lined up its first strategic investors. It has raised €20 million from French aviation firm Safran, French global energy company Engie and Münchmeyer Petersen & Co. (MPC) Group, a German family-owned, global group active in shipping, shipbuilding and industrial services and project development in the field of renewables, and some venture capital firms. The company earlier raised around €20 million in grants from the EU and the German government. It is looking for more partners.

Private sector investment and government support are crucial to enabling the development and scale-up of new technologies to curb carbon emissions as the world tackles climate change, says Böltken, who has a PhD in chemical engineering and wrote his thesis on the production of green hydrogen. Partnering with smaller companies with innovative technologies is a concrete way for large companies to help solve the U.N.’s Sustainable Development Goals, he says. Without their aid it will be difficult for e-fuels to reach price parity. He says that if Ineratec is able to execute on its plan to expand globally he is confident that the company can get the price of e-fuel down to below one euro per liter by 2030.

Ineratec provides modular plants to convert hydrogen, made using renewable electricity and biogenic Co2 or captured Co2, into carbon neutral fuels like e-methane, e-methanol, climate neutral gasoline, clean diesel and e-kerosene. The Karlsruhe-based scale-up, which says it has been profitable since starting operations in 2016, has already deployed 13 e-fuel demonstration plans for a range of applications. One of its pilot plants is being tested by a consortium that includes Lufthansa Cargo. Another is being tested by a chemical company that Böltken said he was not at liberty to name. Ineratec has also opened a first sustainable aviation fuel (SAF) plant in Lower Saxony and intends to fund a pilot plant in Frankfurt capable of producing up to 3,500 metric tons of fuel a year, including SAF supplied directly to the city’s international airport. The plan is to deliver up to 10MW by 2023.

Partnering With The Energy Sector

Ineratec already has partnerships with energy companies across the EU. It places its modular plants next to sources of renewable energy, such as off-shore wind farms, and then converts the energy into green fuels that can be easily stored and transported for use by different sectors. “Engie is a very strong partner because they can supply us with green hydrogen and biogenic Co2,” says Böltken. (Biogenic Co2 is carbon dioxide released from the combustion or decomposition of organic material. Unlike CO2 from fossil fuels, biogenic CO2 is not considered a greenhouse gas emission if it is from a sustainable source.) “We take those two feedstocks and convert them, via a chemical reaction, into green transportation fuels or green methanol for use by the chemical industry,” he says.

Developing synthetic fuel production projects will support Engie’s goal of producing 4 GW of green hydrogen by 2030 and become carbon neutral in three scopes by 2045, says Laurent Rambaud, Investment Director at ENGIE New Ventures.“The rationale for Engie’s investment in Ineratec is to support the development of the technology and help develop a market that would need hydrogen as a feedstock,” says Rambaud. “The target is not necessarily in France,” he says. “Given Engie’s global footprint we could work with them in other geographies.”

Engie, which operates in the fields of energy transition, electricity generation and distribution, natural gas, nuclear and renewable energy, has a presence in more than 20 countries and business platforms in Europe, America and Asia-Pacific.

“Fuel production costs are driven by electricity costs,” says Böltken. “It does not make sense economically to have large scale production in areas like Europe where electricity prices are high.” Ineratec’s plan is to standardize its technology, mass produce its modular plants, and scale-up in places with cheaper and more abundant forms of renewable energy.

The aviation industry has agreed to ambitious targets to cut its carbon footprint. Now it needs to find enough sustainable fuel to help it achieve those goals.  In September 2021 60 companies in the World Economic Forum’s Clean Skies For Tomorrow Coalition – whose mission is to accelerate the deployment of sustainable aviation fuel (SAF) – committed to working together to power global aviation with 10% SAF by 2030.  Synthesized from sustainable, renewable feedstocks such as municipal waste, agricultural resides and waste lipids or developed through power-to-liquid technologies such as Ineratec’s, SAF have already fueled more than 250,000 commercial flights.

However, difficulties remain in getting SAF to scale up production due to its prohibitively high price gap with fossil-based jet fuel, resulting in a chicken and egg problem with supply and demand, according to the World Economic Forum. Costs will fall if production scales up, but in the meantime fuel providers are struggling to be competitive with fossil fuels and face high risks associated with policy and investment uncertainty.

Corporates have a significant role to play in helping new technologies to scale because they are “ not yet at the right scale when it comes to volumes available for air travel,” says Florent Illat, head of Safran Corporate Ventures, the corporate venture arm of Safran, a French international high-technology group, operating in the aviation, defense, and space markets.

“Safran is committed to playing a central and leading role in the decarbonization of the aerospace sector by maturing, accelerating and scaling technologies that will help this goal,” says Illat. “Our investment is really part of this strategy and a means to not only support our communication and lobbying efforts but also effectively devote some money and resources.”

Safran  wants to test the use of green aviation fuels in the aircraft and helicopter engines it produces.  The company said its investment in Ineratec will enable it to work on different technologies for sustainable fuels that can already be blended by up to 50% with regular fuels and be 100% usable in ultra-optimized future-generation engines.

LanzaJet’s approach to SAF is very different from Ineratec’s. Böltken says he welcomes other providers of SAF because many players will be needed to help meet the demand for e-fuel and drive the price down.

In 2019, fewer than 200,000 metric tons were produced globally — less than 0.1% of the roughly 300 million metric tons of jet fuel used by commercial airlines, according to a November 2020 report by the Forum and McKinsey. The report found that if all publicly announced SAF projects are completed, volumes will reach just over 1% of expected global jet fuel demand in 2030.

Maritime transport, the backbone of global trade, is responsible for about 2.5% of global greenhouse gas (GHG) emissions, according to the third International Maritime Organization (IMO) Greenhouse Gas report.

Emissions are projected to increase significantly if mitigation measures are not swiftly put in place. The report found that greenhouse gas emissions of shipping increased from 977 million tons in 2012 to 1,076 million tons in 2018, a 9.6% rise. Over this period the carbon intensity of shipping operations improved by about 11%, but these efficiency gains were outstripped by growth in activity.

Unless this trend is reversed by 2050 shipping emissions could -under a business-as-usual scenario increase by up to 50% relative to 2018, undermining the objectives of the Paris Agreement, according to the Fourth IMO Greenhouse Gas Study, which as was published in 2020 and prepared by CE Delft in the Netherlands and an internal consortium comprising consultancies, research institutes and universities.

A.P. Møller – Maersk, the global provider of container logistics, made headlines in August when it announced that it was spending $1.4 billion to build eight large container vessels that can be propelled by green methanol or fossil-based fuel.

The trouble is there isn’t enough clean fuel in production to power the new ships. Maersk has partnered with REintegrate, a 15-person three-year-old Danish company to secure green e-methanol for the world´s first container vessel operating on carbon neutral fuel and help kick start the market.

Böltken says Ineratec is one of the few green fuel companies that has already built production facilities and realistically meet demand from the maritime industry in the short term.

No Time To Waste

Chemical production is energy and CO₂-intensive. If the chemical industry can use carbon more efficiently and reduce its greenhouse gas emissions it could have a profound effect globally. Ineratec can help by replacing feedstocks made from fossil fuels, says Böltken.

Companies in the automotive sector are also currently testing Ineratec’s e-fuels. There are an estimated 1.3 billion cars on the planet. Not all of them will be replaced by electric vehicles and conversion will not happen quickly so interim solutions are needed. Fossil-free fuels could use the current infrastructure of distribution – from refineries to gas stations- if there is political will to make it happen, meaning someday consumers might be able to pump Ineratec’s e-fuels directly into their cars, says Böltken. For the moment, though, the focus is on aviation, shipping, and the chemical industry. “We have to start somewhere,” says Böltken. “If we want to meet the 2030 climate goals there is no time to waste.”