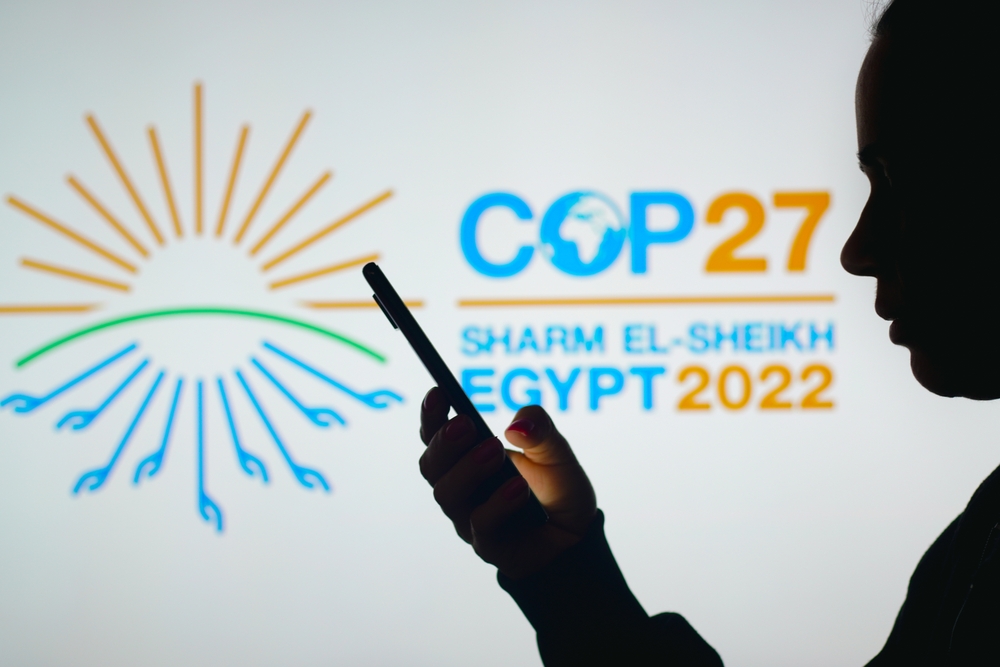 How green tech and collaboration between young companies and mature industries can help tackle climate change will be among the key focus areas at the COP27 United Nations Climate Change Conference in Sharm El Sheikh November 7-18.  New offerings that will be highlighted during the conference cover everything from new and improved ways to  transform waste into petroleum-free materials to the use of Web technologies to incentivize farmers to turns soils into carbon sinks.

The need for innovation is more critical than ever. All three of the key UN agencies produced worrying reports about climate change this week. The UN environment agency’s report found there was “no credible pathway to 1.5C in place” and that “woefully inadequate” progress on cutting carbon emissions means the only way to limit the worst impacts of the climate crisis is a “rapid transformation of societies”.

Current pledges for action by 2030, even if delivered in full, would mean a rise in global heating of about 2.5C, a level that would condemn the world to catastrophic climate breakdown, according to the UN’s climate agency. Only a handful of countries have ramped up their plans in the last year, despite having promised to do so at the Cop26 UN climate summit in Glasgow last November.

The UN’s meteorological agency reported that all the main heating gases hit record highs in 2021, with an alarming surge in emissions of methane, a potent greenhouse gas.

LanzaTech, a World Economic Forum Global Innovator, will be among the many green tech companies present at Cop27 that will showcase ways to curb climate change.  The U.S.-based scale-up, a finalist in this year’s Earthshot competition, is creating a circular economy system that turns pollution from steel mills and other greenhouse gases into household cleaners, laundry detergent, sustainable aviation fuel, perfume and more. Large corporates participating in the ecosystem system include Migros, L’Oreal, Total, British Airways, Shell, Unilever, Coty and ArcelorMittal. By recycling carbon from industrial off-gases; syngas generated from biomass resources such as municipal solid waste, organic industrial waste or agricultural waste; and reformed biogas, LanzaTech says it can displace 30% of crude oil used today and reduce global CO2 emissions by as much as 10%.

On October 27 LanzaTech announced a breakthrough: a next-generation bioreactor that is expected to improve the economic viability of integrated biorefineries. The demonstration facility, which is located in Canada at the City of Edmonton’s Waste Management Centre and operated by energy company Suncor, is providing data to support future commercial deployment.

“This pilot is expected to achieve greater efficiency and lower operating costs in capturing waste-based feedstock and converting it into ethanol,” Lanzatech said in a statement. “As world leaders prepare to gather in Egypt for COP, it is critical to show meaningful progress in achieving Net Zero. This collaboration is the perfect example of how we can get it done to create a post-pollution future. “

Agreena, a Danish startup presenting at COP27 on November 12, is taking a different tack to help the world get to Net-Zero.  On November 3 it announced that it is enhancing its core product offering – soil carbon certificates – with tokenization on blockchain for automated money movement. Agreena says its Web3 solution has been developed to meet farmers’ needs for instantaneous payments while retaining the credibility and security of a regulated payment system.

“We see our new ability to use blockchain for issuing payments as a key to unlock the market for farmers to transition from conventional agriculture to carbon farming,”  Simon Haldrup, CEO of Agreena said in a statement. “With agriculture responsible for approximately one-third of the global carbon footprint, the switch to regenerative farming practices creates one of the greatest opportunities for climate action in the world – we are here to enable that.”

Regenerative agriculture not only reduces greenhouse gas emissions – but actually turns soils into carbon sinks, naturally removing CO2 from the atmosphere and storing it. But the most significant hurdle for  farmers to take up climate-friendly practices are the upfront costs associated with the transition.

Haldrup co-founded Agreena in 2019 to support farmers’ entrance into the green economy by connecting them to the voluntary carbon market.To deliver instant payments for farmers, Agreena partnered with the first regulated European payments institute built on blockchain, Ztlment. The two Danish fintech players have just successfully tokenized carbon credits on the Algorand,blockchain and have connected the payment for those tokens to real euros with smart contract software.

Three companies previously covered in The Innovator:  Wiliot, Aleph Farms, and UBQ Material, which are working with large companies to help scale their solutions, will be among ten green tech companies in Israel’s delegation to COP27.

Wiliot has developed IoT Pixels computer stickers to track any product in a supply chain, providing item-level information about location, temperature, fill rate, carbon footprint, and more, which the Israeli startup says can make a massive difference in helping companies meet their carbon reduction targets. Its customers include some of the world’s largest retailers, apparel companies, furniture makers, logistics and pharmaceutical companies.

UBQ Materials develops materials made from organic and unrecyclable wate.  PepsiCo is using a patented conversion process developed in combination with UBQ Materials to turn unsorted household waste, including organics and unrecyclable plastics, into a bio-based thermoplastic.  On November 2 UBQ Materials co-Founder and co-CEO, Jack ‘Tato’ Bigio, met with Prime Minister of the Netherlands, Mark Rutte, to discuss government support for the company’s upcoming expansion in Bergen Op Zoom.

Meanwhile, Aleph Farms,  a cultivated meat company that grows steaks directly from non-genetically engineered animal cells, has been officially recognized by the Agriculture Innovation Mission for Climate (AIM for Climate) as an Innovation Sprint Partner. As part of this innovation sprint, $40 million is being invested in cellular agriculture R&D over the next five years through Aleph Farms with the support of of a number of investors, including Strauss Group, the largest food products manufacturers in Israel.

The United States and the United Arab Emirates, alongside 39 other countries and over 180 non-governmental partners, officially launched the AIM for Climate initiative at COP26 in Glasgow, Scotland in 2021. The initiative galvanizes support and investments for innovation geared towards climate-smart agriculture and food systems.

At Cop27 a Climate Action Innovation Zone will aim to accelerate the pathway to net zero through cross-sector partnerships and investment. A whole day will be dedicated to exploring new ways to finance projects and a ClimaTech competition, organized by Egypt’s International Cooperation Ministry, will feature pitches from 15 green startups from around the globe that were selected from the 422 startups that applied. The chosen firms will pitch their businesses to a judging panel composed of top UN officials as well as representatives of Afreximbank, Microsoft, and Google during the climate summit’s Youth Day. The startups will present sustainable solutions in sectors including energy, agriculture, food security, transport, and urban development. Together they operate across 46 countries, with eight firms based on the African continent.

Daika Wood, is useing a special process to mix wood waste from sawmills with water and other natural ingredients like cellulose, and lignin, the material that makes wood rigid materials. The all-natural material is already being used to create tabletops and wall coverings for office furniture company Steelcase, as well as screwdriver handles for Stanley Black & Decker, the world’s largest tool company.

These Shoes Were Made For Walking…250x Faster

Pittsburgh-based robotics and engineering company Shift Robotics has just unveiled its battery-powered sneakers — the Moonwalkers – which are being billed as the “world’s fastest shoe.”  The Moonwalkers aim to boost walk speeds up to 250%. Powered by a state-of-the-art brushless DC motor, eight polyurethane wheels work together with the gearbox to drive the overlapping wheels to simulate much larger diameter wheels to climb over uneven terrain. The Moonwalkers can be used in multiple types of terrain, are fully charged in 1.5 hours, have a range of six miles, and can be set in “lock” mode for stairs with just a quick gesture. Rather than thinking of them as powered skates, think of them as more of a ‘travelator’ for your feet. “Moonwalkers are not skates. They’re shoes. The world’s fastest shoes actually,” said Xunjie Zang, founder and CEO of Shift Robotics.. The shoes are being sold on  Kickstarter for $1,099. Delivery of orders is expected in March.

The Financial Times reported that L’Oréal suspended advertising spending on Twitter, according to two people the newspaper interviewed with knowledge of the move, as leading brands and marketing groups grow nervous that inappropriate content will spread on the platform under Elon Musk’s ownership. In a statement provided to the FT on November 3 after the news was published, a L’Oreal spokesperson denied the report.   While Musk has sought to reassure marketers that Twitter will not become a “free-for-all hellscape”, executives at some of the world’s biggest advertising groups told the FT That several clients were privately reviewing — and in some cases curbing — their exposure even if they were reluctant to make their concerns public. “There’s some quiet quitting going on,” one ad executive was quoted as saying.

The Reserve Bank of India (RBI) has begun a wholesale digital rupee pilot, with a retail trial set to follow within weeks. The wholesale pilot will focus on “settlement of secondary market transactions in government securities,” says a statement. The use of a Central Bank Digital Currency (CBDC) is expected to make the interbank market more efficient, with settlement in central bank money cutting transaction costs by preempting the need for settlement guarantee infrastructure or for collateral to mitigate risk. The RBI is pulling in nine banks – State Bank of India, Bank of Baroda, Union Bank of India, HDFC Bank, ICICI Bank, Kotak Mahindra Bank, Yes Bank, IDFC First Bank and HSBC – for the pilot. Other wholesale CBDC pilots, including for cross-border payments, will follow while a retail trial, involving merchants and customers, will launch within a month.