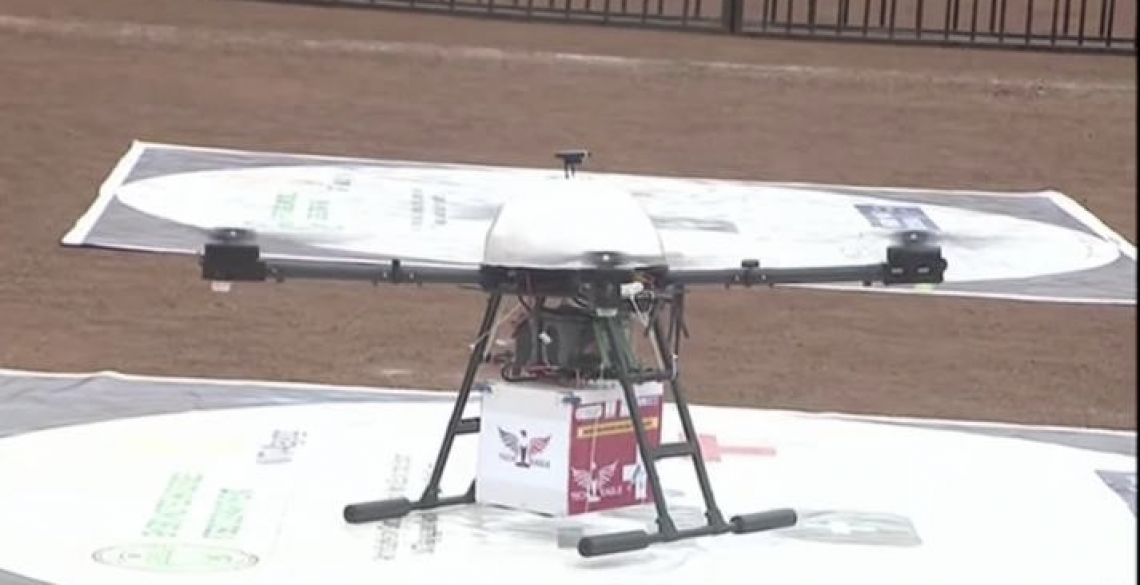 September marked the first ever delivery by drone of MMR and influenza vaccines in India. The trials, which were organized by the World Economic Forum in partnership with the state government of Telangana, Apollo Hospital’s Healthnet Global and NITI Aayog, are being conducted over 28 days in designated air corridors in the district of Vikarabad, Telengana. The plan is for COVID-19 vaccines to also be transported beyond the visual line of sight.

The hope is that the deliveries, which began on Sept. 11, will lay the groundwork for a more elaborate drone delivery network that will improve access to vital healthcare supplies in remote and vulnerable communities in India and elsewhere. The trials may also help drone deliveries of all kinds take flight across the globe.

“Small scale deliveries are the first step in building a whole new kind of network and showing what is possible,” Timothy Reuter, the Forum’s Head of Aerospace and Drones, said in an interview.   “We have demonstrated what is possible in Telengana, an area with many people living in isolated communities. In the future, drones could be considered essential infrastructure because they enable rural areas to have the same access to health supplies and other life saving goods  as urban areas. That is socially transformative. We believe the model of India will be an inspiration to many other countries with similar challenges.”

Delivering medical goods using drones has been an option for at least five years. Doctors Without Borders began testing the transport of diagnostic samples between remote clinics and central testing facilities during a tuberculosis outbreak in Papua New Guinea as early as 2014. As other countries witnessed the possibilities, the first big leap forward took place in Rwanda, where experiments, or pilot projects, matured into national-scale implementations outside of the urban core – delivering blood on demand and at scheduled intervals.

“Now we are in a new era and more ready,” says Reuter. “The regulation is just starting to catch up to the technology.”

Whereas Rwanda has a centralized health care system,in India   each state has its own health services.

Since healthcare and aviation are two of the most regulated areas finding a compromise required the support of the Vikarabad municipality, India’s Ministry of Civil Aviation, the Directorate-General of Civil Aviation and the Airports Authority of India. This model of cooperative federalism could serve as a template for other regions, paving the way not just for the delivery of humanitarian and medical supplies but for B2B applications of drone technology, according to Vignesh Santhanam, the Forum’s Drone Lead for India.

The next step, says Reuter, is to find the right economic models. “It is something we are collecting data about and we have launched a pilot project on this. We need to find a way to pay for this on an ongoing basis. We have seen at scale that you can get the cost down, but we are still in a ramp up phase.”

The India trials are an important milestone for drones, he says. “If we can make this a reality in South Asia we think more people will see what is possible and there will be more demand.”

United Parcel Service is getting into same-day delivery with a deal to buy Roadie, a platform that uses gig workers to deliver items from retailers and other shippers quickly. UPS has been looking for ways to crack into the same-day delivery market amid the growth of e-commerce and demand for even quicker deliveries. Delivery platforms like DoorDash. and Uber offer such services, while retailers like Amazon, Target and Walmart. also have been building out same-day delivery capabilities.

Self-driving startup Argo AI, automaker Ford Motor and Walmart will together launch an autonomous vehicle delivery service in Miami, Austin, and Washington, D.C, the companies said on September 15. Initial integration testing is expected to begin later this year, the companies added.The move comes as consumer expectations shift to next-day or same-day delivery, particularly in urban areas with a higher concentration of deliveries

Electric vehicle maker Tesla will work with global regulators to ensure data security, Chief Executive Elon Musk told the World New Energy Vehicle Congress in China..”With the rapid growth of autonomous driving technologies, data security of vehicles is drawing more public concerns than ever before,” Musk said in a video speech, adding data security is not only the responsibility of a single company.

Musk’s comments came after China’s industry ministry published a notice on Sept. 16 telling companies to step up cyber and data security oversight over connected vehicles, saying that security risks in the industry had become increasingly prominent.All relevant companies should establish data security management systems and regularly assess risks from network attacks, the Ministry of Industry and Information Technology said in a statement.

Cars are being fitted with an ever-increasing array of sensors and cameras to assist drivers. But the data such equipment generates can also be used by manufacturers to develop new technologies, such as autonomous driving systems, raising privacy and security concerns, particularly when the information is sent abroad.

Mobileye, the Jerusalem-based developer of driver assistance technologies acquired by Intel Corporation for $15.3 billion in 2017, revealed this week that it is set to launch a pilot for autonomous taxis and ride-hailing services in Munich and Tel Aviv next year, in collaboration with German-headquartered international car rental and mobility service provider Sixt.

Amsterdam-based online supermarket Picnic has raised €600 million in its Series D round of funding to accelerate its growth and become the ‘most’ sustainable grocery delivery service in Europe. The round was led by the Bill & Melinda Gates Foundation.The funds will enable the company to invest in automated fulfillment centers, electric vehicles, and the expansion of Picnic’s tech team. The sustainable concept, in which groceries are delivered for free to customers’ homes with electric vehicles while also avoiding food waste, is one of the main transformational elements of Picnic’s delivery model.

JP Morgan is working with Ant Group’s Alipay to power payments made by U.S. credit cards on the B2B Alibaba.com, where small firms can sell their goods. Marketplaces accounted for almost half of all online purchases in 2020, with online sales hitting more than $4.2 trillion globally in 2020, according to Statista. The rise of e-commerce means that small and micro businesses need a fast, easy and safe way to seamlessly accept payments from customers across different payment methods and channels, says JP Morgan.