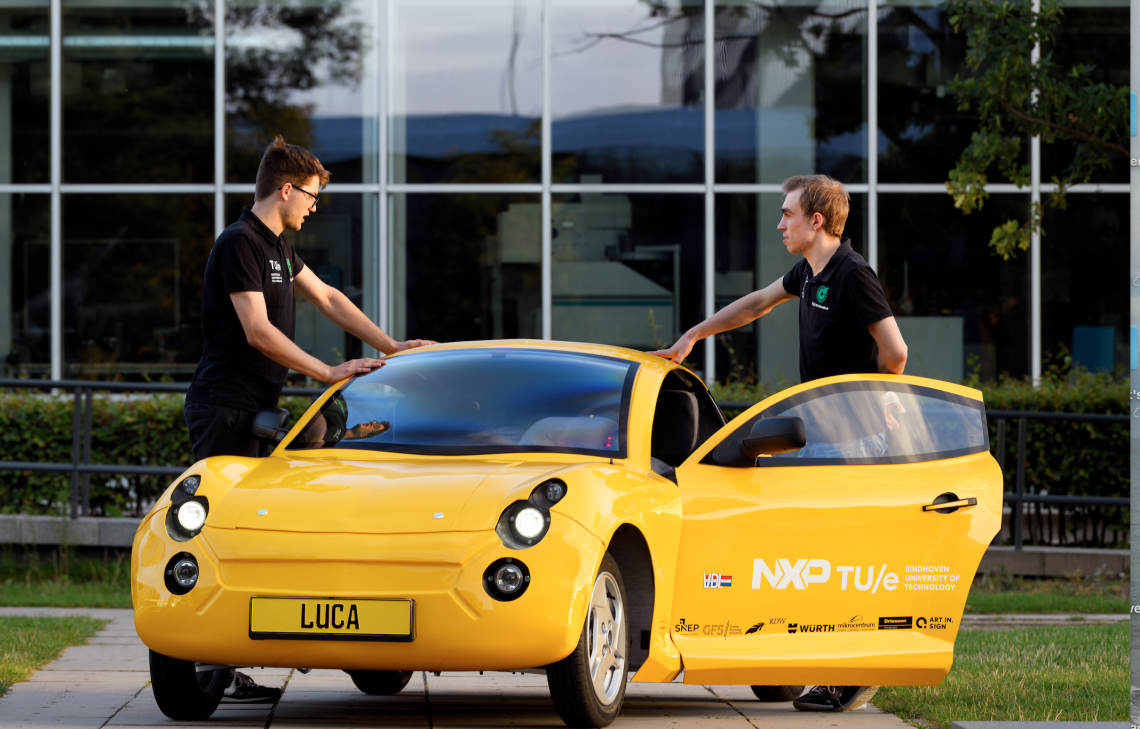 The auto industry’s drive for sustainability clearly needs to pick up pace. In a 2020 survey of over 500 automobile companies Capgemini found that sustainability has become a strategic priority for the industry – 62% of automotive organizations claim to have a comprehensive sustainability strategy with well-defined goals and targets.  But implementation seems fragmented and an additional $50 billion investment is needed to meet sustainability commitments. Supporting and promoting the circular economy – the most implemented sustainability initiative – is deployed by 52% of the organizations. Yet, more needs to be done to reap its full potential, Capgemini concludes in its report. A sporty-looking yellow electric car named Luca made almost entirely out of waste may speed things up. The car was unveiled Oct. 8 by a student team from the Eindhoven University of Technology.

Luca’s body, finish, windows and interior are all made out of recycled materials. The car’s chassis is made out of flax, plastic waste taken straight from the ocean and a honeycomb core made from PET, a common thermoplastic polymer used to make water bottles. The car’s middle tunnel showcases a patented bio-based material made of unsorted organic, paper and plastic waste – everything from banana peels to dirty diapers to used yogurt containers and cardboard – created by Israeli startup UBQ Materials  that can substitute for conventional plastic, wood and concrete in the manufacturing of everyday products.

The body of the car is made out of recycled ABS, a common hard plastic used in lots of consumer products, like toys, televisions and kitchen products. The car gets its yellow color from a colored foil wrap instead of a paint job. This foil can be removed without leaving any residues, meaning the plastic it covers will require little to no refinement in its recycling stream  The car’s custom seats are made out of a combination of coconut fiber and horsehair, materials that are usually just thrown away. The fabric surrounding the cushions is made out of recycled PET but looks and feels like suede. The side and rear windows are also made out of recycled materials. The students note that thee recycling process gives the windows a “luxurious, black tint” proof, they say, that “sustainability can be anything by boring.”

The car, which has two electric motors in the rear wheels, can reach a top speed of 90 kilometers per hour and a range of 220 kilometers. It achieves efficiency through its electric drive train and its lightweight construction: the car only weighs 360 kg without batteries. Thatis less than half of the weight of comparable cars. And, says the students, Luca only requires a total of 60 kg of batteries, far less then the hundreds of kilograms needed for other electric cars.

“The team want to show that sustainable technology can be sexy, by implementing waste as a valuable material into a sporty looking car.” TU/ecomotive team member Lisa van Etten said in a statement. “In this way the team hopes to make people and industry aware of their consumption and contribute to the circular economy.”

Green hydrogen, low-carbon aviation fuel and electric trucks are among 55 clean technologies that can help the European Union to reach its goal of climate neutrality by mid-century, according to research by Capgemini Invent, part of Capgemini Group, released Oct. 14 .The research, which aims to provide a guide for policymakers and investors, identified technologies and projects the EU could invest in using money from its budget and recovery fund to help the region’s economies bounce back from the coronavirus crisis. The report looked at 200 projects and chose 55 technologies as “ripe for investment” that could deliver results quickly and at scale up to 2030 and 2050.Combined, they could create a market of net-zero goods and services totalling up to 790 billion euros ($933 billion) a year and reduce emissions by 871 million tons. The technologies will require around €144 billion of public and private investment a year and support 12.7 million jobs but for every €1 invested in this portfolio, it could generate €9  of future turnover in European markets by 2050.The projects chosen include: solar module gigafactories; large-scale floating offshore wind; large-scale green hydrogen production; grid development to enable 100% renewable power; direct carbon capture technology, the report said.

The World Economic Forum and the Global Blockchain Business Council released the Global Standards Mapping Initiative, a comprehensive effort to assess the current state of blockchain. Based on input from over 30 technical standard-setting entities, 185 jurisdictions and nearly 400 industry groups, the reports are  intended to serve as a resource for the blockchain community to develop  frameworks and standards to propel the industry forward. The reports map and assess the current blockchain and digital asset landscape across three distinct areas: technical standards; legislation and guidance by sovereign and international bodies; and industry best practices and standards. Key insights highlighted in the reports include the technology’s fragmentation both worldwide and within jurisdictions, overlaps, gaps and conflicts in standard-setting – and where these activities may be premature – a lack of dynamic guidance for new uses of the technology, the need for proactive strategies from organizations, and the important role regulators will play in shaping the future of the technology. The reports also provide action-oriented guidance for public and private sector stakeholders and include an interactive world map of blockchain legislation and guidance.

Luxury watchmaker Breitling is partnering with digital identity consortium Arianee to issue a new kind of certificates of authenticity for its luxury watches. Instead of relying on physical certificates, the watchmaker gives the buyer a unique digital passport that certifies the origin of the watch. By using a blockchain-based solution, Breiling hopes to ensure that its digital passports can’t be altered.

Stripe, the online payments provider that is one of Silicon Valley’s most valuable private companies, is expanding into Africa for the first time with the acquisition of Lagos-based payments company Paystack. Paystack, which also provides payments systems, works with more than 60,000 businesses including FedEx, UPS and MTN and processes hundreds of millions of dollars each month. The Nigerian startup will continue to operate independently and Stripe will over time embed it into its global payments and treasury network, a programmable platform for global money movement that currently spans 42 countries, Stripe said.

Design guru Philippe Starck has crafted a smart ring that stores payments cards, transit passes and business cards for the style-conscious consumer. Created in collaboration with start-up Icare Technologies, ‘Aeklys by Starck’ does not require charging and includes security technology from NXP, incorporating data encryption and a deactivation system to guard against theft.Icare Technologies is developing additional features for the ring in the realms of access control, loyalty programmes and parking payments. It says that new features will automatically be uploaded to the ring on release.

RBC Capital Markets has launched an AI-powered electronic trading platform it claims will help improve results and insights for clients in a “measurable and explainable way”. Built with the Canadian bank’s Borealis AI research centre, the platform, called Aiden, looks to apply deep reinforcement learning into a constantly changing environment like equities trading. RBC says Aiden taps hundreds of pre-programmed data inputs and its ability to make more than 32 million calculations per order to execute trading decisions based on live market data, dynamically adjust to new information and learn from each of its previous actions.

Finance chiefs of the Group of Seven industrialized nations said Oct. 13 that digital payment services must be “appropriately supervised and regulated,” raising concern as both public authorities and companies are studying the issuance of digital currencies.The warning comes as China’s central bank has started trial payments using digital yuan in part of the country, a move that could mount a challenge to the international currency system based on the U.S. dollar, while Facebook has proposed its Libra stablecoin. In a joint statement released after their video conference, the G-7 finance ministers and central bank governors acknowledged that digital payments could help improve access to financial services and reduce costs. But they also emphasized the necessity of making efforts to prevent fraudulent activities such as money laundering.

A new alternative meats business led by a longtime Unliver executive has raised $335 million since March to compete in an increasingly crowded market.  The Livekindly Collective, which has amassed five companies since its launch, produces plant-based meat alternatives and operates a lifestyle media platform focused on plant-based living. At its helm is Kees Kruythoff, the company’s chief executive and chairman. Mr. Kruythoff held numerous leadership roles at Unilever over his nearly three-decade career there, including in its North America and home-care divisions.The company recently raised $135 million in new funding led by its founding organization Blue Horizon Corp. and other investors, including growth investor Trustbridge Partners and European private-equity firm EQT. The company’s brands include the Fry Family Food Co., which has a large market in South Africa; Germany-based LikeMeat; and Sweden’s Oumph.

France, Netherlands Call For The EU To Regulate Tech Giants
France and the Netherlands jointly issued a call for the bloc’s competition authorities to take pre-emptive measures against Amazon, Apple, Facebook and Google as they prepare sweeping legislation to curb the companies’ market power. Cedric O, France’s digital minister, and Mona Keijzer, the Netherlands state secretary for digital affairs, have signed a position paper calling on regulators in Brussels to take swift action against emerging tech giants and existing “gatekeeper” platforms — including options to break them up. The latest move came after Silicon Valley’s tech giants found out this week that they now risk being placed on a European “hit list” as part of an effort by regulators to curb their market power.