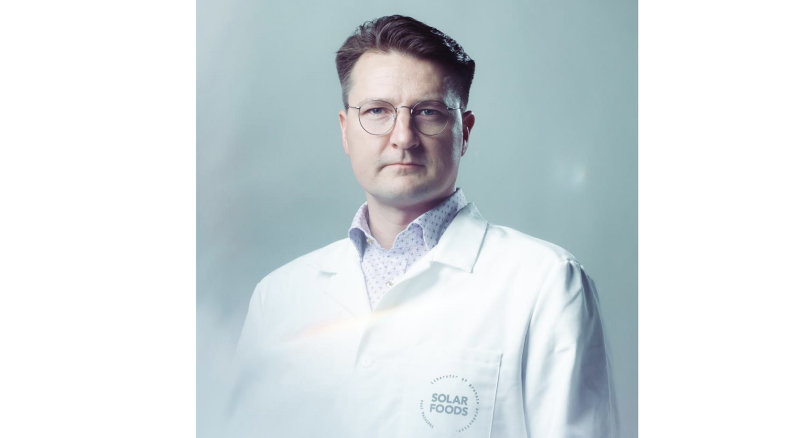 Solar Foods, a Finnish startup, has found a way to make food ingredients, plant-based meat alternatives and cultured meat from air, electricity and Co2, an approach that promises to significantly reduce the environmental impact of food production. It has already partnered with Finland’s Fazer Group and is interested in teaming with other big food companies.

The startup’s platform plans to focus on three segments: protein ingredients for packaged foods such as breads, pasta and dairy, plant-based meat alternatives and as a culture medium for real meat production from cells.“We can create a ready made lasagna— from the pasta, to the sauce to the meat — without the consumer ever knowing how the physics behind it were provided,” says Solar Foods CEO Pasi Vainikka.

Inspired by NASA and Soviet Union space program and further developed by VTT Technical Research Center of Finland and LUT University, Solar Foods produces a single-cell protein called Solein, using a natural fermentation process similar to that used in the production of yeast or lactic acid bacteria. Its amino acid composition compares well with known protein sources such as soybean and beef, the company says. And, it has the added advantage of binding Co2 instead of causing it.

The idea is to separate food production from agriculture and cattle raising, says Vainikka, the former head of VTT’s Neo Carbon Energy division. It was through his division’s research that the idea for a proof-of-concept of developing food from thin air was established. Solar Foods “is an example of a type of solution that is emerging more and more in the field of tech from the intersection of different disciplines,” he says.

Other startups — such as Air Protein in the U.S. — are also trying to develop food from thin air.

Solar Foods has applied for necessary approvals from the European Food Safety Authority. Subject to the timing of approvals, it plans to build its first factory and go to market by late 2021 or early 2022. It is currently fund raising and looking for partners, says Vainikka. He says he believes Solar Foods can quickly provide Finland with 4% of the protein eaten by the population.

“We see foods as platforms for our protein,” says Vainikki. “In order to scale the technology we will need to be included in a lot of consumer products, therefore we are planning on taking a B2B approach and are very interested in partnering with food companies.”

In September Solar Foods announced a partnership with Fazer Group, a 128-year-old Finnish food company, to do research on Solein’s applicability into different food applications. In a statement Fazer said it was entering into the agreement with Solar Foods as a way of reaching four ambitious sustainability core goals that it has set for itself by 2030: 50% less emissions, 50% less food waste, 100% sustainably sourced and more plant-based.

Solar Foods won an Index Award in September from Denmark for developing the most impactful solution significant to the environment and improving people’s lives.