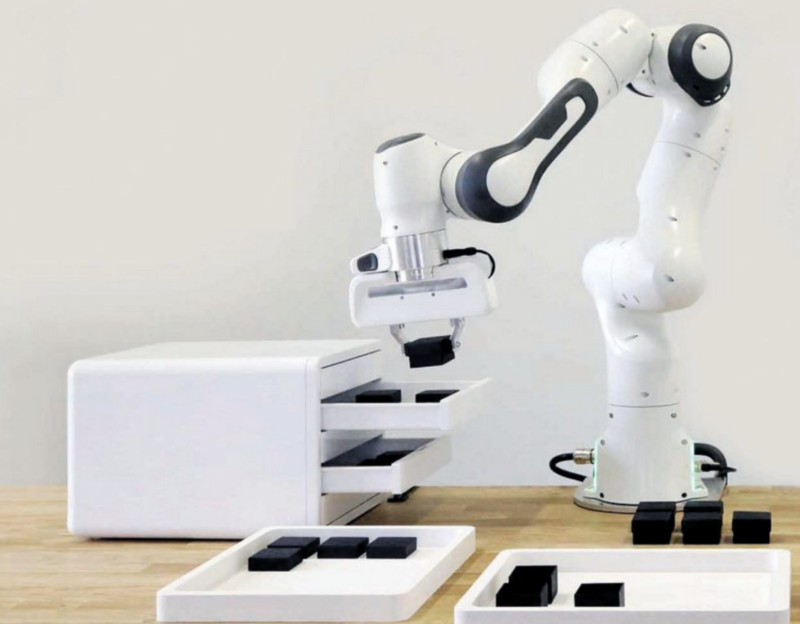 Robots are increasingly working next to humans, raising efficiency in warehouses, factories and labs.

At a warehouse in the French city of Bordeaux, Skypod, a robot created by startup Exotec Solutions, carries a bin that can hold up to 30 kilograms as it wheels around using a laser scanner for navigation. When it reaches inventory racks, it grabs onto rails and glides upward until it finds the correct shelf to retrieve the merchandise. The Skypod then zips to a conveyor belt where a human uses a scanner to verify the goods. These robots save physical wear and tear on employees, who walk an average of 15 kilometers a day fetching goods. The robots can retrieve 400 items per hour, compared to 80 for humans. They also allow French ecommerce retailer Cdiscount, which is trying to transform its logistics to stay ahead of competitors, to build shelves higher and pack items much closer together, making better use of space in its existing warehouses. Vincent Valloir, head of supply chain planning and innovation for Cdiscount, says using Exotec Solution’s robots is helping it avoid the expense of building additional warehouse space. It is also increasing the number of same-day deliveries it can handle, by improving order processing speed. But, rather than replacing employees with robots, the company is redefining their roles, training them to do new tasks such as managing the robotic systems or monitoring digital systems.

“This innovation changes the approach and the roles of everyone in the organization,” says Valloir.

For several decades, talk of automation has conjured a bleak vision of a future in which robots steal jobs from workers as machines battle humans for economic dominance. But, as the Cdiscount example illustrates, the emerging reality is a picture of cooperation, rather than conflict, as robots and people increasingly work side-by-side in warehouses, factories and labs.

As at Cdiscount, robots are fetching inventory in warehouses to speed fulfillment. They’re also being installed in production facilities to perform a growing range of tedious, repetitive tasks. And in some cases, they’re even being attached to humans in the form of exoskeletons to help with lifting and avoiding injuries.

“Robots allow enterprises to be more competitive and to run better, especially small and medium-sized businesses,” says Adrien Poinssot, Universal Robot’s sales development manager for France. “And if the work goes better, the company hires more people. There is a real synergy between robots and employees.” Robots have been part of manufacturing for decades, primarily used in heavy production lines for things like automobiles. Early models were considered hazardous to humans and some had to be caged. And their size and cost meant they only made economic sense for such massive operations. Over the past decade, things have changed dramatically. According to the International Federation of Robotics’ latest annual report, global annual sales of industrial robots grew to 387,000 units in 2017, up from 294,300 the previous year. That includes 69,000 robots installed for use in logistics, up from 26,300 in 2016, making adoption of robots in this sector one of the highest for any sector. Overall, robot sales are projected to rise to 630,000 annually in 2021, benefitting established industrial robot-makers such as Germany’s KUKA (now owned by Chinese electrical appliance manufacturer Midia), as well as a host of new players.

The market is not without casualties. Rethink Robotics of Boston, which was co-founded by Rodney Brooks, an Australian robotics pioneer, announced in early October it would shut down. Its robots were intended to usher in a new age of automation; one where machines would work safely next to humans, rather than be confined to their own sections on the factory floor. That trend looks here to stay even though Rethink Robotics couldn’t get enough market traction.

A seminal moment in industrial robotics came in 2012 when Amazon acquired Kiva Systems for $775 million. Kiva had emerged as a leader in the robotics revolution, having developed an inventory management system that allowed machines to roam a warehouse, find goods, and then bring them to a human packer waiting in front of a delivery truck. The acquisition gave rise to Amazon Robotics, a Massachusetts-based company that manufactures mobile robotic fulfillment systems. It now reportedly has produced more than 100,000 robots used in the e-commerce giant’s fulfillment centers.The acquisition created a void because Kiva is no longer selling its robots to anyone else. As a result, a large number of startups have rushed to fill that gap. Among them is Los Angeles-based inVia Robotics, which has designed a warehouse robotics platform for e-commerce distribution centers and other fulfillment facilities. Founded in 2015, the company, which has raised $29 million in venture capital, says its inVia Picker autonomous mobile robots can help clients increase fulfillment by as much as 500%. “Warehouse automation is critical for retail businesses to streamline workflows, increase throughput and keep up with consumer demand,” says Lior Elazary, the company’s co-founder and CEO.

The founders of Lille-based Exotec Solutions saw a similar opening. Founded in 2015, the company has raised $21 million in venture capital for its robotic fleet of order preparation robots, which it co-designed with Cdiscount. Exotec Solutions CEO Romain Moulin says such systems are quickly moving from being considered a novelty to an essential tool for all warehouses. “The demand from the market is huge,” Moulin says. “And it’s going to play a big role in leveling the playing field for everyone.”

Beyond just finding and moving items, robots are increasingly being employed to perform straightforward chores like packing boxes and doing some basic assembly of components.

For example, Munich-based Franka Emika, which was founded in 2016, makes Panda, a collaborative robot designed to be easy to use out of the box. The Panda can be programmed to perform tasks by pushing several buttons on the arm while guiding it through a series of maneuvers to “teach” it the process.

The most well-known player is Universal Robots of Denmark, which has become a leader in “cobots,” robots designed to physically interact with humans in a shared workspace. Launched in 2005, the founders of the Danish company wanted to find a way to make large industrial robotic systems more accessible to small and medium businesses and manufacturers. Today, the company sells three models of cobots, ranging from a table-top version for light assembly to a large version designed for packaging and placing items on pallets. The cobots can handle painting, assembling, and attaching labels, among other tasks. Most importantly, the cobots are relatively simple to set up and can be reprogrammed for different jobs as a business evolves. The company, which was acquired by Teradyne in 2015, has sold 25,000 cobots. “More and more there is a need to produce the right product at the right moment,” says Universal’s Poinssot. “The collaborative robot is one of the bricks of this new industry.”

Poinssot says the company is continuing to try to expand the market through an online digital learning platform called Universal Robots Academy as well as an online marketplace that sells accessories from third-party developers. As with logistics robots, Poinssot says a big part of the appeal is relieving employees of the most dreary, repetitive parts of their jobs. It’s that focus on employee well-being that is a driving force behind another brand of machines that augment workers: Exoskeletons.

ABI Research has projected that sales of exoskeletons will grow from 5,000 units in 2017 to more than 100,000 in 2025. Strapped to the outside of employees’ bodies, exoskeletons vary in design and sophistication. Some contain enough sophisticated computing to justify the use of the term robotics, serving as a kind of merger between man and machine.

For instance, LG recently announced it was developing the CLOi SuitBot, an exoskeleton designed to reduce strain on human workers. Employees strap it around their legs and lower back and the wearable robot automatically adjusts itself as it senses a wearer’s movement. It can also connect to other LG service robots, becoming a part of a network of automated devices. One of the first companies in this field was Ekso Bionics of Richmond, California. The company originally got its start designing exoskeletons for the military and then moved into medical versions to help disabled patients. Ekso more recently began getting inquiries from industry and manufacturing. While companies have been focused on making workplaces safer, reducing the number of accidents, they still want solutions to protect employees from the long-term injuries that could prevent them from doing repetitive or heavy work. In 2015, the EksoVest for industry was introduced. The passive device uses gas-filled springs to give employees a boost rather than using any electronics. As the number of workplace injuries drops, “companies are turning their attention to quieter problems like ergonomic issues,” says Zach Haas, senior product manager for EksoWorks. “This is something that occurs when someone is doing their job absolutely correctly.” This past summer Ford announced it would roll out EksoVests to employees in 15 factories around the world. The company says it wants to reduce the physical toll on employees from tasks like holding power tools over their heads all day. Haas says this is just one indication that exoskeletons that augment human capabilities are on their way to becoming standard equipment.

“There was a time when people didn’t wear hard hats at construction sites,” he says. “Now that’s standard. I think it will be the same for this. We’re having a hard time keeping up with the demand.”