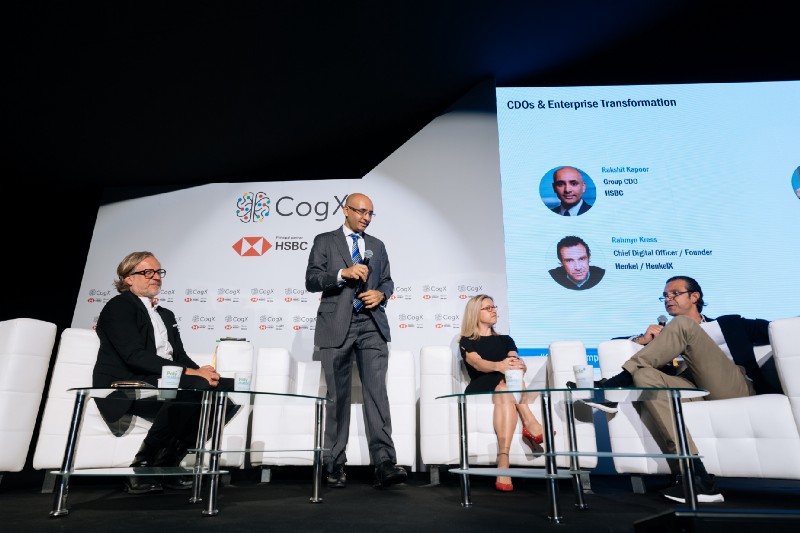 CogX 2019, the festival of AI and Emerging Technology, which took place June 9–11 in London, gathered more than 17,500 people during London Tech Week. Speakers included, Kay Firth-Butterfield, head of AI & Machine Learning at the World Economic Forum, Astro Teller, Captain of Moonshots X, an American semi-secret research and development facility and organization founded by Google in January 2010, which now operates as a subsidiary of Google parent company Alphabet and Rahymn Kress, Chief Digital Officer at Henkel. Exhibitors included some 150 of the hottest AI startups. Read on to get some of the key takeaways from the conference :

Tech Innovations for the 22nd Century

Artificial intelligence will be key to offsetting climate change, developing driverless cities and transforming construction in cities. That was the focus of one of the sessions on the first day of CogX 2019. DeepMind, a UK AI company now owned by Google talked about how applying AI to the consumption and generation of energy can offset climate change. It is involved in two trials with Google, one focused on data centers and another involving contracted wind farms.DeepMind said it started with data centers because 3% of the world’s energy is now used by cooling systems for data centers. It built an AI system that gave it a snap shot of what was happening in the data center every five minutes . It then cleaned the data and developed models that generated recommendaiton and projections on energy efficiency and also satisfied rigerous basic safety constraints. It then gave those recomendaiton to a human manager to manually implement every hour. The system saved 40% of energy use. From there DeepMind built a control system that allowed cooling to be directly controlled by AI . The system introduced eight new safety mechanisms which reduced the energy savings to 30% but, DeepMind noted, « AI is getting better over time » and that once some of the basic constraints can be loosened the numbers will improve further.On the generation of energy AI has an important role to play to play in solving the intermittancy issues around renewable energy sources such as wind power. If AI can make wind power more predictable and project output a day in advance it can increase the value of renewable energy sources by 20% and, says DeepMind, » if we are able to increase economic value of windpower what we are hoping is this will lead to increased adoption of renewable energy sources. »

Graphcore, a UK semiconductor company that develops accelerators for AI and machine learning and aims to make a massively parallel Intelligence Processing Unit that holds the complete machine learning model inside the processor, spoke about what needs to happen before autonomous cars go mainstream. « How close are we to magic happens ? It is taking longer than we thought, » says Graphcore. « We are a couple of years away from where we thought we would be. Industry is in a state where we don’t know what we don’t know. » What is needed, says Graphcore, is a new kind of computing platform to enable machines to anticipate what happens around them. Industry experts do now yet know what the final algorithms will look like but are confident that AI will enable Level 5 driverless vehicles, ie vehicles that do not include controls for humans.

AI is also changing the way cities are built. Within 30 years the global population will grow to 10 billion people and nearly all of those people will want to live inside cities . The issue is that already more than 40% of carbon emissions come from buildings and building demands for energy keeps growing . So the challenge is we know we have to reduce carbone emissions but how do we make room for 2 billion more people without making our planet more inhospitable ? That is where a European company called SpaceMaker comes it. It is using AI to build smarter an more sustainable cities through what it says is the most advanced computational design platform using AI that can be applied to real-world construction projects across the globe. « We believe that by using AI we can give architects powers that they have never had before, » the company said.

This session at CogX explored the challenges faced by Chief Digital Officers (CDOs) in the age of disruption. Egon Zehnder, a global executive recruitment firm, used the session to announce a new report based on a survey of over 100 CDOs globally who together manage companies with more than a trillion dollars in revenue. The report points out CDO is a relatively new role « that evokes some sort of corporate magician who, with the help of sophisticated analytics and a lot of other tricks, transforms a company from old and unresponsive to fast-moving and tech-savvy, from analog to digital. » They are hired for a variety of reasons and with differing expectations. Some companies envision the role as an extension of the Chief Information Officer or the Chief Technology Officer, although focus of the role is rarely strictly on information technology and/or data security, and just one-third of the CDOs of the largest global companies come in with this experience, the report says. Other companies are seeking an internal cheerleader as they abandon practices and processes of an earlier era. Some CDOs have P&L responsibility; others don’t. « Yet regardless of how the role is defined, the expectations placed on every CDO’s shoulders are weighty, » the report notes. « The success of this person may ultimately determine the survival of the entire organization, if the problems they are facing are urgent enough. »

So what has to happen in order for a CDO to make that transformational magic happen? And what kind of power and skills must that CDO possess ?

The majority are the first individual holding that remit and the majority are not just from outside of company. Most are hired to drive innovation and find new ways to monnetize customers and perspective customers but end up spending their time trying to change the company culture.

Indeed, some 75% of Chief Digital Officers said their companies were not ready for transformation so they have to spend their time evangelizing rather than executing.The report found that CDOs are struggling to align themselves with the rest of their organization (or to align the company to their plan) and a full 80% of respondents stated that evolving cultures was more or much more difficult than they had previously believed. More than two-thirds (68%) mentioned that the breaking down of silos was tougher than they had thought.

The report’s conclusions say it is critical to understand how open a company is to change before bringing in a digital transformation specialist. The survey found that most CEOs are attuned to just how important the CDO role is to the success and sometimes even survival of the company. Yet when it comes to other members of the C-suite — particularly CFOs and other P&L leaders who must respond to short-term financial pressures — the opposite is true. Not only must the CEO express solidarity with the CDO; he or she must also ensure that the rest of the C-suite supports and understands the role as well. And it must go beyond the C-suite: Middle management is where inertia can set in and the board must be in the loop as well. mMny CDOs meet infrequently with the board of directors, the group charged with executing the overall strategy of the firm often hears about the transformation indirectly or not at all. This is a huge mistake, equivalent to a board in danger of being hacked never communicating with its Chief Information Security Officer or other top IT executives. If a firm is going through a digital transformation, that means that every aspect of its approach to business will, either immediately or eventually, become “digitalized.” For a board to not understand how this is working — or not working — could determine whether the company as a whole succeeds or fails.

The Innovator moderated a session on this topic during CogX. The panel concluded that Europe is in a good position to compete with China and the U.S. on AI. Panelists pointed to efforts to ramp up cross-collaboration in Europe that include both the public and private sectors. The panel also expressed confidence that the UK — which boasts one of the strongest AI ecosystems in the region — would continue to be involved in European-wide efforts even if it is no longer part of the European Union. Europe’s more human-centric approach to AI is a plus, the panel concluded, and can be branded as an alternative to the U.S. free market approach, which has allowed U.S. companies to exploit consumers’ data with little or no government oversight and the Chinese approach which uses AI to control the population. Panelists also agreed that although the European market is fragmented there is enough data to develop or even lead in some sectors, such as health. To succeed Europe will have to determine which areas it wants to prioritize.