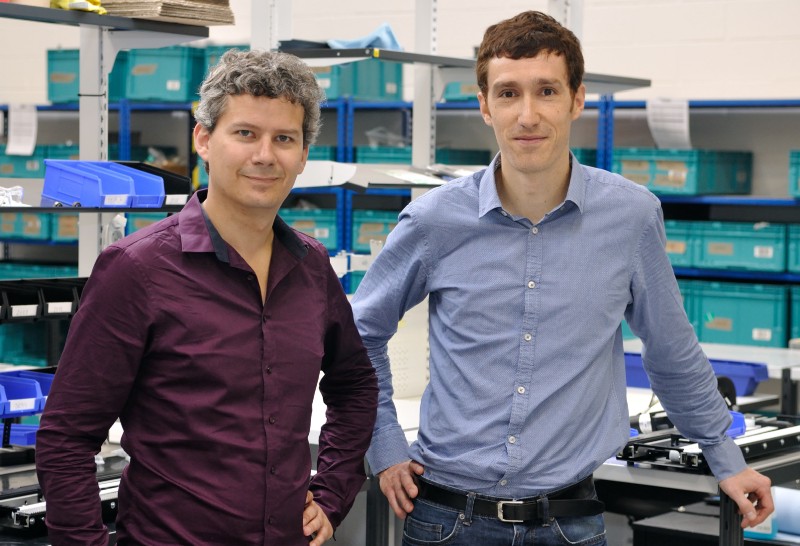 Exotec Solutions is developing fleets of robots to automate warehouse operations. The company’s autonomous Skypod robots help the human workforce by retrieving items from shelves and bringing them to the employees charged with processing them for shipment. In an era of booming e-commerce, retailers and distributors see such efficiency as crucial to remaining competitive.

“The demand from the market is huge,” says Exotec co-founder and CEO Romain Moulin. “And it’s going to play a big role in leveling the playing field for everyone.”

Based in the French city of Lille, Exotec was founded in 2015 by Moulin and current CTO Renaud Heitz. The pair were working on robotics for GE Healthcare in Paris,when they decided to strike out on their own. Moulin said they were intrigued by Amazon’s acquisition of Kiva Systems in 2012 for $775 million. Kiva had emerged as a leader in the robotics revolution, having developed an inventory management system that allowed machines to roam a warehouse, find goods, and them bring them to a human packer at a truck. While Amazon now reportedly uses more than 100,000 robots in warehouses, the deal also created a void because once the company was sold to Amazon Kiva robots were no longer available to anyone else.

“We were discussing what we could do with advanced robotics,” says Moulin. “We felt there should be some interesting things to do with logistics.”

So, the two partners began work on their own robotic warehouse system. A partnership signed with French ecommerce leader Cdiscount in 2016 proved to be a lucky break. Cdiscount, which was founded about 20 years ago, was looking for ways to reinvent its own logistics. So Exotec began working with Cdiscount on co-designing the robotic system.

Today Exotec’s Skypod robot can carryß around a bin that can hold up to 30 kilogra,s as it wheels around the warehouse using a laser scanner for navigation. When it reaches the inventory racks, it grabs onto rails and glides upward until it finds the correct shelf to retrieve the merchandise. The Skypod then returns to a conveyor belt where a human uses a scanner to verify the goods.

This saves physical wear and tear on employees who walk an average of 15 kilometers a day fetching goods, Moulin says. And it’s more efficient because the robots can fetcn 400 items per hour, compared to 80 for humans. The system also allows Ddiscount to make better use of space in existing warehouses because it can pack items much closer together while also extending the shelving system far higher.