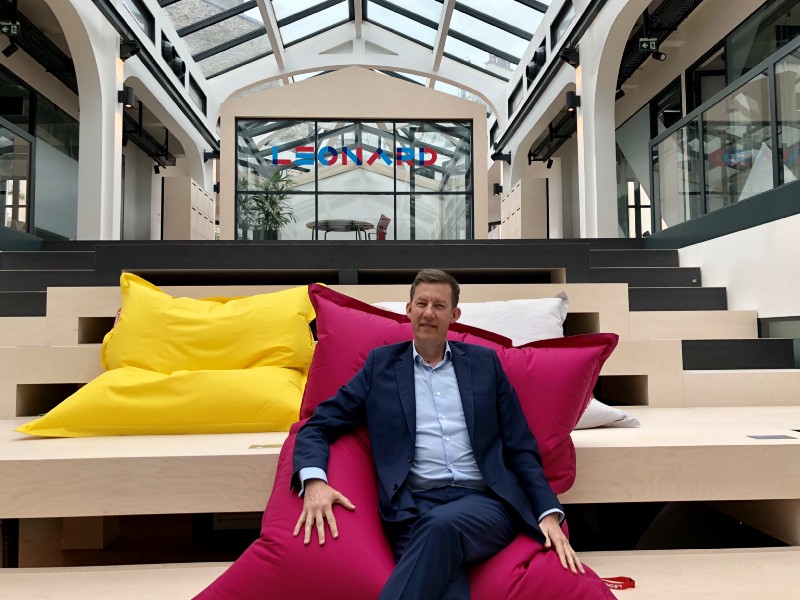 It has skylights, colorful cushions, co-working spaces and the requisite foosball table, so anyone could be forgiven for mistaking this recently refurbished building in Paris’ 12th arrondissement as just one more corporate accelerator.

But Leonard, a new innovation hub that VINCI, the global 118-year-old French construction and concessions company is inaugurating on June 7th, aims to be much more than a home for startups and intrapreneurs. Its function is to also serve as a meeting place for experts from VINCI’s six divisions — think of it as a commons for innovators from across the group — and a gathering point for a wide-variety of actors working on smart cities.

“We want it to be known in France and beyond that startups, investors, engineering school students, think tanks and other corporates all are welcome here,” says Philippe Dewost, VINCI’s Chief Leonard Officer. “We want this place to be extremely open.”

Leonard’s opening comes as big corporates around the world are struggling with how to create an operating system for innovation. While it is still early days the innovation hub’s decision to welcome a wide variety of outside players, encourage intrapreneurs, create working groups across divisions and involve senior management could serve as a model for other companies.

“To me Leonard is a tremendous symbol of freedom,” says Dewost, who has more than 20 years of experience in high-tech and telecoms. “With this brand umbrella we can take positions or raise questions or explore territories that do not commit VINCI right at the beginning, and this helps both Leonard and the Group to avoid being exposed to potential misinterpretations by financial analysts. Here we have a lightweight structure but it is still solid because there is a cable between us and the mothership. We know where we come from and who we return to.”

One of Leonard’s goals is to serve as an early warning system on new market trends that could impact VINCI’s businesses. To this end Leonard aims to collaborate with engineers, scientists, sociologists, architects and philosophers. It is organizing a series of lectures this summer, including one on June 12 by French doctor, politician and former astronaut Claudie Haignere on the feasibility of building cities on the moon.

The wide variety of lecture topics is fitting. Leonard, the innovation hub’s name, is a nod to the creativity and open spirit of famed Italian painter and sculptor Leonardo da Vinci whose many interests included invention, architecture and engineering.

And just like Da Vinci combined many fields, Leonard’s aim is to organize work groups around cross-sector themes in order to identify opportunities for the evolution and growth of the group over a five-to-ten year period.

Leonard is also serving as a forum for regular, more informal meetings between experts in different divisions. In the past VINCI Groups’ divisions had little contact with each other but the evolution of markets and technology is changing that. For example, autonomous cars involve the Eurovia and VINCI Construction infrastructure divisions, VINCI Energies manages recharging networks and VINCI Autoroutes and VINCI Highways are involved in the evolution of mobility services.

Although artificial intelligence experts working on autonomous car projects inside the VINCI divisions are tackling some of the same challenges they had never met each other until they attended a recent meeting at Leonard, says Dewost.

“Autonomous vehicles have an important relationship with infrastructure,” says Dewost. “The more we have been digging into that topic, talking with experts, talking with peers in our industry and equipment makers like Valeo, the more we came out of this really convinced that the equation often proposed by U.S. car vendors that a car will be 100% intelligent and the infrastructure will be 100% stupid will not deliver the acceptable safety level that mayors and municipalities want. The only way to improve efficiency is to add intelligence to the car and the infrastructure and them communicate regularly.”

Another of Leonard’s main missions is to accelerate new businesses. One of the external startups currently working in the Leonard space is called Wind My Roof. The company, which was founded by engineering students and incorporated in May, installs horizontal windmills on the very edges of roofs to harness energy from stronger air streams.

Intrapreneurs , ie employees who come up with innovative ideas and are then given time to work on their projects, are also part of the mix at the hub. The VINCI Group already put out two calls for ideas from intrapreneurs. In each round, employees suggested nearly 100 potential projects. A jury of 20 people, including senior company executives and outside partners chose eleven projects in diverse areas such as predictive maintenance and the use of augmented reality on construction sites. During four months the intrapreneurs are permitted to use 20% of their work hours on their projects. A new selection committee chose five to work full-time on their projects to try and grow them into new lines of businesses for the Group.

At Leonard, innovation can and does come from anywhere. “To tackle the challenges of smart cities we have to have people with different areas of expertise work together,” says Matthieu Lerondeau, Leonard’s head of communication and communities.

This is why Leonard wants to open its doors to a whole variety of other outside actors, such as think thanks and big companies. “The idea of smart cities have been around for decades,” says Dewost. “ I gave a keynote on the topic five years ago at IDATE and recently reviewed my slides. The big questions haven’t changed and they still haven’t been answered.”