As cars become more about software, Europe’s automakers are gearing up for battle with Silicon Valley.

Sedric, the Volkswagen Group’s self-driving concept car, drives home how advances in artificial intelligence promise to transform both the automotive industry and the passenger experience. 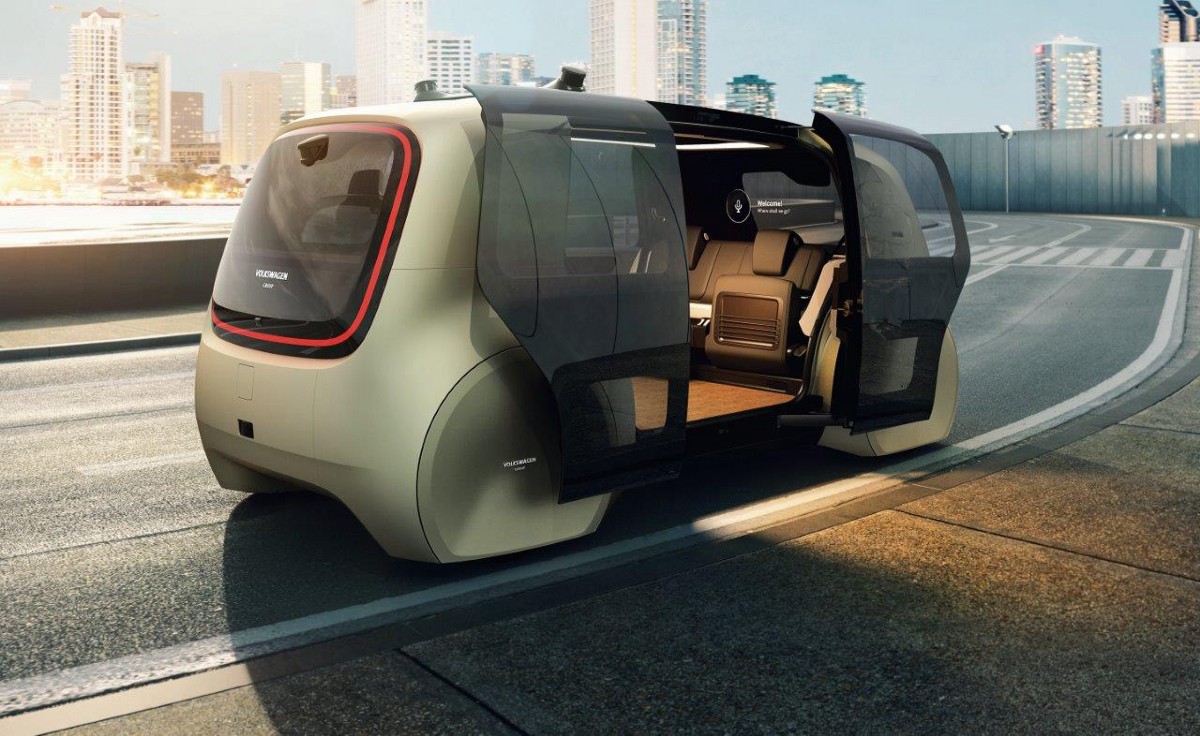 The car, which has no steering wheel, gas pedal or customary cockpit controls, will have a life of its own: It can drive the children to school and then take the parents to their offices, look independently for a parking space and collect the dry cleaning — all at the touch of a button, with voice control or with a smartphone app. It promises to do all of this “automatically, reliably and safely.” Don’t think of it as a car but as part of a “mobility experience” that VW Group will make available in the future. The button that acts as the car’s remote control is expected to be part of a universal mobility ID that will operate worldwide. So, while people can choose to own their own Sedric, they could also use the button on the same remote control to summon Sedrics that are part of a VW Group autonomous shared mobility fleet — at any time, at virtually any location. Such self-driving cars are expected to drastically reduce accidents, transform the face of our cities and reduce the environmental impact of mobility.

But that’s not all. Before long, thanks in part to AI technology, cars will not only drive themselves, they will know who you are, understand your changing moods, adapt to circumstances, and react to new demands and new tasks on the fly, according to a recent McKinsey & Company report.With better connectivity, and the latest autonomous technology, drivers and passengers can use their time in transit to stay connected with their friends, educate themselves or be productive. Auto manufacturers are trying to adapt to this very different future. Klaus Froehlich, a member of BMW’s board of management, told an audience at the DLD tech conference in Munich earlier this year that the company will evolve from being a carmaker to a mobility services company. All car manufacturers need to move in that direction, because the next generation of cars will essentially be smartphones on wheels that will offer a whole array of personalized services, powered by AI. The Silicon Valley tech giants Apple and Google, which are building the operating system for connected and autonomous vehicles, could end up dominating the auto industry because cars, like mobile phones, are becoming software platforms.

In fact, the McKinsey report says “software competence is increasingly becoming one of the most important differentiating factors for the industry, for various domain areas, including assisted driving, connectivity, and infotainment. Further on, as cars are integrated into the connected world, automakers will have no choice but to participate in the new mobility ecosystems that emerge as a result of technological and consumer trends.” The key will be who in the mobility ecosystem will own the relationship to the customer.

The risk is that automakers end up as low-margin hardware makers while the Silicon Valley giants grab the most lucrative part of the market. Some question whether Fiat-Chrysler has already ceded to Google by allowing its cars to be equipped with the Silicon Valley company’s self-driving-car hardware and software technology. Players like Google don’t concern themselves with improving the quality of the cars themselves. Their goal isn’t to offer autonomous driving as an optional feature, but rather to extend the time consumers engage with online services, making money on the data. Europe is at a strategic disadvantage because it doesn’t have an equivalent to Google, Facebook or Amazon, says Alexander Renz, Managing Partner of New Mobility Consulting. Silicon Valley players have access to data through their ubiquitous online services, combined with the software talent to turn that data into increasingly smart and contextual digital assistants based on AI, he says.

“The cars of the future will collect massive amounts of valuable data,” says Renz. “Data will be the crucial control point in the future of mobility and will be vital to training AI models and digital assistants.” But don’t rule out European automakers just yet, says Philipp von Hagen, a board member of Porsche Automobil Holding, which comprises twelve brands from seven European countries. “We have seen a lot of excitement and chatter about the disruptors taking over the traditional car industry. But the game is not over,” he says. “We feel the heat and it is propelling us forward.”

A key weapon in German automakers’ arsenal is the mapping company HERE, which Audi, BMW and Daimler bought from the former mobile phone giant Nokia last year for €2.8 billion. Since then the Chinese Internet conglomerate Tencent, the Chinese mapping service NavInfo and the Singaporean sovereign wealth fund GIC, have bought a combined 10% share of HERE, while the American chipmaker Intel bought a 15% stake. Highly detailed maps are not only crucial for autonomous driving, but also play a key role in providing location-based services. The mapping consortium is the linchpin of an alternative mobility ecosystem that doesn’t depend on Google or Apple.

In May HERE along with Daimler and other companies announced a joint, pan-industry platform for online registration, e-identity and data services. At the heart of this new “standard access procedure for online activities” is a so-called master key. The idea is that customers could use this key for registration and identification purposes across a number of industries while maintaining control over their data.

It is all part of an effort to battle Silicon Valley giants and to develop the direct relationship with consumers that many experts consider vital for the future. Early efforts by carmakers to offer digital services have met with limited success. Due to the traditional car industry’s dealership structure automakers are not used to having direct relationships with consumers; they are less adept at designing engaging/compelling user interfaces; they tend to charge for things that users are used to getting for free (like access to an app store) and they are competing on services and for top talent with their Silicon Valley counterparts.

For example, updates introduced by Tesla that can be downloaded “have proven very disruptive to incumbents,” says Jochen Renz, Director at New Mobility Lab. “Where traditional car companies have no ongoing relationship with the consumer, Tesla has created passionate brand advocates who happily purchase incremental features delivered over the air or even on demand.”

While European automakers are global market leaders today, industry observers say they would do well to take Tesla seriously and to study Nokia’s cautionary tale: It was the number one maker of mobile phones globally and laughed off competition from Apple, believing that an industry outsider would never succeed. Today Nokia is no longer a mobile phone leader and Apple is on top, after transforming the entire industry. To better arm themselves for the future, European automakers are partnering with companies like Nvidia, Intel, Mobileeye and Rightware, opening or working with accelerators and acquiring or investing in sharing-economy companies like Gett.

The idea is to integrate hardware and software so that automakers, rather than tech companies, own the customer. Software — including AI — is not in carmakers’ DNA, but using it to create delightful services will be key if carmakers want to remain in the driver’s seat.